[IN our issue of November 15, 1923, we referred briefly to the first Dutch light 'plane, the Carley monoplane, which was put through its preliminary flying tests at Waalhaven, Rotterdam, recently. A correspondent in Holland now sends us the following particulars, photographs, sketches, and scale drawings, from which a very good idea of the Carley monoplane can be formed. - ED.]
About six months ago Mr. J. D. Carley, a well-known Dutch pilot and designer, commenced work on a tiny aeroplane. He very carefully studied the engine-capacity question, and first an Indian "Super Chief" engine of 10 h.p. was fitted, but did not give satisfactory results. A French Sergant air-cooled four-cylinder engine of 12 h.p. behaved like the Indian, and stopped more than once whilst in flight.
Mr. Carley then came to the conclusion that motor-cycle engines never would make possible safe cross-country flying, and decided to fit a small, but real aero engine, the Anzani three-cylinder of 20-22 h.p.
The results were amazing. The little 'bus flew at Waalhaven aerodrome (Rotterdam) in extremely bad weather, piloted by Mr. Raparlier, a Belgian War-pilot, who was very enthusiastic about its behaviour, the ready answering of the machine to its controls, the easy starting and landing, and the speed. A few days later a flight was made from Waalhaven to Scheveningen, near the Hague, in 16 minutes. There the wing was taken from the fuselage, and the machine transported through the streets of the Hague to the works at Voorburg, where we have made the accompanying sketches.
From the photographs will be seen that the Carley light 'plane is a cantilever monoplane of very clean lines, the thick tapering wing being placed on the fuselage. The machine is painted in Mr. Carley's favourite colours - i.e., a red fuselage and yellow wing and tail planes.
The fuselage is a wooden structure of triangular section. It consists of three longerons of plain solid section, and of a number of bulkheads glued together and covered with three-ply. There are no metal fittings or wires in the whole fuselage.
The wing is a tapering cantilever of very deep section. It is entirely constructed of wood. The ribs consist of a thin three-ply web, with strips glued and nailed to the sides acting as flanges. There are two box spars. The wing is covered up to the front spar with three-ply, aft of the front spar to the trailing edge with fabric. There are no bracing wires. Ailerons of ample proportion are fitted, and each aileron is connected with the wing by three hinges. These hinges are of very simple construction, as shown in one of our sketches. In the thick centre of the wing is a circular cut-out portion, which forms a part of the pilot's cockpit. As the fuselage is triangular, the pilot's seat is rather high, and thus a very good view is obtained. The controls are of the usual type: joystick and rudder bar. One of the sketches shows how the rudder bar is supported. The tail planes are of standard type, of cheap, simple, but strong construction. The horizontal tail plane is fitted to the fuselage by a U-bolt on each side.
The elevator is in one piece. The cables operating the elevator are carried over pieces of aluminium in order to prevent damage to the fabric.
The undercarriage is of the divided type, and hinged to the fuselage where the lower longeron forms the keel. The axle is provided with a wooden streamline fairing, and rests in a cut-out of the V of streamlined steel tubes which runs from the upper longeron to the end of the axle, which is sprung by rubber cords. The ends of the V are fitted to the fuselage by a triangular steel box, where a bolt goes through the eye in the streamline tube. To the same box is fitted a U-bolt which connects the wing to the fuselage, as may be seen in the illustration.
The tail-skid is fitted to the rudder, in order to facilitate steering when taxying over the ground. It is made of a steel spring, one end being wound over a piece of steel tube and then bent straight, the other end being wound right down. There the ends meet and are welded to a steel plate.
The Anzani engine is mounted on a steel ring, and drives a Pierre Levasseur propeller of 1-70 m. (5 ft. 7 ins.) diameter. Direct aft of the engine is fitted the petrol tank, with a capacity of 3 1/2 hours. The feed of the carburettor is by gravity. A windscreen is in front of the cockpit.
All the main dimensions of the Carley motor-bike of the air are shown in the accompanying general arrangement drawings.
The characteristics are :-
Weight empty 135 kgs. 300 lbs.
Pilot 75 ,, 167 ,,
Petrol and oil for 3 1/2 hours' flying. 15 ,, 33 ,,
Weight fully loaded 225 ,, 500 ,,
Load per h.p. 10 ,, 22 ,,
Load per m.2 19 ,, 3-9 lbs./sq. ft.
Maximum speed 140 km. 87.5 m.p.h.
Minimum speed 35 ,, 44 ,,
Messrs. Carley Aeroplanes intend to take part in the light 'plane competitions for the 100,000 francs prize of L'Aero Sports, by making a non-stop flight from Waalhaven to Paris.
Now they are building a two-seater light 'plane for school purposes. It is a braced biplane and is to be fitted with a 20 h.p. Anzani engine. It is not yet permitted to give details, but we hope to give them in the course of a few weeks. 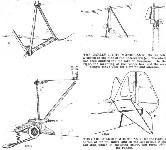 THE CARLEY LIGHT MONOPLANE: Top: On the left, a sketch of one side of the undercarriage. The wheel has been omitted for the sake of clearness. On the right, the mounting of the rudder bar, and the very simple hinge used for elevator and ailerons. Bottom: On the right, a sketch of the tail unit; and on the left details of the tail skid, which is mounted below, and turns with, the rudder.