AN American commercial aeroplane that gave rise to a certain amount of interest on the occasion of the last New York Air Meet, held in October, during which it obtained ДальшеMore>>> first place in the efficiency test in Event No. 5 (Aviation Town and Country Club of Detroit Trophy Race) was the Wright-Bellanca - a six-seater, built around the 200 h.p. Wright "Whirlwind" engine.
The importance of speed in commercial work is one of the primary factors in the practical utilisation of the aeroplane over other methods of transport. It is interesting to note, therefore, that the Wright-Bellanca attained an average speed over the two-mile course at Mitchel Field, with pilot and five passengers, of 138 m.p.h. - considerably higher than the performance expected by the designer himself.
This new machine was designed by Mr. G. M. Bellanca, who has been responsible for several other successful designs - a low-powered biplane built in 1918 and a cabin-type monoplane (or, to be exact, a sesquiplan) on similar lines to the machine under review built in 1922, and which was described in FLIGHT for September 28, 1922.
Mr. Bellanca severed his connection with the original Bellanca firm some years ago, and the new Wright-Bellanca is being produced by the Wright Aeronautical Corp. of Paterson, N.J., who announced a short while back, that they could put this machine, including engine, on the market for about 812,000, and that orders were then being booked for delivery next spring. This is an indication that the machine has got beyond the experimental stage, and is, in fact, an advanced and improved version of the model produced in 1922.
It will be remembered that the latter, also an air-cooled job, put up some noteworthy records and established for itself an excellent reputation. The new model, however, besides having a more powerful engine and some 5-ft. more wing span, possesses many important improvements and refinements.
The Wright-Bellanca is a tractor cabin-fuselage monoplane, with fairly thick-section wings mounted on the top of the fuselage, and braced by struts. There are two struts for the entire external bracing of the wing on either side, and a somewhat unique feature of these struts - which extend from the lower longerons of the fuselage up to the wings at a point about one-third the total wing-span, from the tips - is that they also form lifting surfaces. It would seem that this form of wing bracing has given entire satisfaction in practice, and is likely to come into more general use when the wings are not of the true cantilever form.
In designing this machine very careful provision for safety features was made, including low landing speed, good vision, the elimination of fire hazard, good gliding angle (12 1/2 to 1), excellent controllability at low speeds, wide wheel track, high wing clearance, and high safety factors throughout.
The cabin is exceptionally roomy and is of the totally-enclosed type, the pilot being located high up right in front, immediately forward of the leading edge of the wings, where he has a remarkably good range of vision in all directions - except, perhaps, directly to the rear. Large windows are provided in the main part of the cabin, access to which is obtained by means of a door in the side.
The landing gear is well designed, and is of the "Oxford-Bags" variety (viewed from the front there is a decided bandiness); as well as having a comparatively wide track, this landing gear is also very strong.
The Wright "Whirlwind" engine is installed in a steel engine mount hinged to the nose of the fuselage so that it can readily be swung to one side, allowing for inspection or adjustments at the rear of the engine. This engine mount is made from welded steel and tube chrome molybdenum steel, and weighs only 13 1/2 lb. The oil tank is located in this mount.
From a profit-making standpoint, the Wright-Bellanca would appear to offer great possibilities, seating five passengers with light luggage, or six passengers without luggage. For express and mail carrying the large cabin space (122 cub. ft.) provides a great amount of cargo room.
Having a quick take-off (900 ft. per min.) and short "roll," the Wright-Bellanca could be used in any locality when ordinary landing field facilities are found. Once in the air and under normal cruising conditions only a low output of power is necessary, which means a low fuel cost.
With the high speed figure of 138 m.p.h., attained at the New York air races, this machine cruises easily at 100 m.p.h. at 1,500 r.p.m. At this rate the fuel consumption is about 12-5 gallons per hour. It was also noticed at the New York air meet demonstrations that the Bellanca could fly at low speeds with the tail well down without any danger of pancaking or stalling. This makes for a short "roll" in landing, which, together with the low landing speed of 42 m.p.h., is all in its favour as regards commercial work.
Other more important characteristics of the Wright-Bellanca are as follows :-
Span 45 ft. 0 in.
Chord 6 ft. 7 in.
O.A. length 24 ft. 9 in.
Height 8 ft. 5 m.
Wing area 272 sq. ft.
Weight, empty 1,790 lb.
Weight, fully laden 3,230 lb.
Weight per h.p., fully laden 16-1 1b.
Weight per sq. ft., fully laden 11-8 lb.
Pay load 850 lb.
Fuel capacity 63 gals.
Oil capacity 5 1/2 gals.

THE WRIGHT-BELLANCA SIX-SEATER: An American commercial aeroplane fitted with a 200 h.p. Wright "Whirlwind" engine. The wing-struts also contribute to the lift.
WB-2

A RECORD BREAKER: The Wright-Bellanca monoplane upon which recently a new duration record of 51 hours 11 minutes was established. The pilots were Clarence D. Chamberlin and Bert Acosta. The engine fitted was a 200 h.p. Wright "Whirlwind" of the type used by Commander Byrd on his flight to the North Pole in the Fokker monoplane.
The Bellanca monoplane on which Messrs. Chamberlin and Levine flew from New York to within 100 miles of Berlin.

THE ATLANTIC VETERAN: The Bellanca monoplane "Miss Columbia," which has made three Atlantic crossings, is now operated by Personal Flying Services, Ltd., of London, for air taxi work, etc. Our picture shows it at Croydon prior to Capt. Boyd's flight to Berlin this week.

Painted to represent Chamberlain’s transatlantic Columbia of the 1930’s, this Bellanca CH-300 was restored as a CH-400 with a 450 h.p. Pratt & Whitney by Preston Snyder.

ATLANTIC FLYERS ARRIVE AT CROYDON: The photograph in the top left-hand corner shows the Bellanca monoplane crossing the aerodrome at low altitude while in the bottom right-hand corner it is seen at the moment of alighting. Above, Mr. Chamberlin is seen descending from the machine, and below, on the left, the famous pilot is introducing Mr. Levine to his mother. 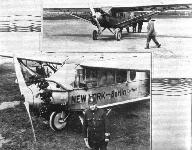 THE WRIGHT-BELLANCA MONOPLANE AT CROYDON: The upper photograph shows the general appearance of the New York-Cottbus monoplane, while in the lower may be seen in more detail the Wright "Whirlwind" engine, the pilot's cockpit and wind screen, and a corner of the large petrol tank.
<<   0/0   >>