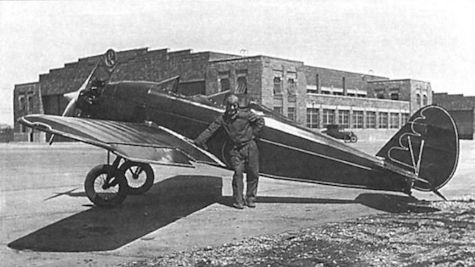 THE MOHAWK "PINTO"
An American Monoplane for the Private Owner

IT was early last year that the then Mohawk Aero Co of Minneapolis - formed by Leon A. Dahlem, Wallace C. Cumming, Geo. A. MacDonald and S. E. Whitney - started construction ДальшеMore>>> on a two-seater low-wing monoplane from the designs of Mr. Cumming. Subsequently the machine was finished, and after a number of test flights its performance was so promising that the company was enlarged and reorganized under the name of Mohawk Aircraft Corporation, and the "Pinto" was put into production.
There are many noteworthy features about the Mohawk "Pinto" that make it particularly suitable for the private owner. It has exceptionally clean lines, being entirely free from external bracing, as the wings are of the full cantilever type, of thick section. Thus, except for a periodic inspection of the control system, the "Pinto" owner is not worried by any rigging of the wings, while the welded steel tube fuselage not only provides strength but also eliminates rigging and truing-up operations.
It also scores, it is claimed, as regards speed range and stability. Fitted with the 60-80 h.p. Detroit "Aircat" air-cooled radial engine, and carrying full load, it has a maximum speed of 110 m.p.h. and a landing speed of 35 m.p.h. The take-off and pull-up qualities are also good - it is stated that the "Pinto" will unstick after a run of 150 ft. and climb at 800 ft. per minute with full load. The cushioning effect of the low wings, together with the low landing speed, provide the quick pull-up, so that the "Pinto" is essentially a good "small field" proposition.
The wings of the "Pinto" taper from root to tip both as regards chord and thickness; they are also set at a dihedral angle. A modified U.S.A.35 wing section is employed. The main spars, which are not parallel, but inclined to each other toward the tip, are of box section with spruce flanges and two-ply mahogany walls. A spruce bulkhead is employed every 14 in.
The ribs are built up with spruce cap-strips and three-ply mahogany webs, while the compression members have spruce stiffeners; torsional stresses are taken by double wire bracing. Three-ply mahogany is employed to reinforce the leading edge, top and bottom, back to the front spar, while the rest of the wing is fabric covered. The ailerons, which are long and narrow, are of the Fries type, having a slight lip on the lower leading edge, giving a balancing action. These ailerons are claimed to be very effective, even at stalling speeds. They are controlled by a torque tube passing through the wing, and the control is automatically detached when the wing is removed, and vice versa, when attached.
Each wing is easily and quickly removed by withdrawing four pins, one at the top and the bottom of each spar, so that the machine can easily be stored in an ordinary garage. The wings have been tested by distributing a load of 3,000 lb. over each wing.
The tail plane is also a cantilever, as is the vertical fin, and we think we are correct in saying that the elevators and rudder are also of the Fries type.
The welded steel fuselage, of rectangular section with rounded top, is without wire bracing, the engine being carried on a frame in the nose. A neat cowling and spinner fairs the engine into the streamline shape of the fuselage. Behind the engine is the petrol tank which supplies the engine with fuel by gravity.
Pilot and passenger are located in the same cockpit, but with their seats staggered, the pilot's being slightly forward on the left-hand side. This arrangement, it is claimed, gives all the advantages of seats in tandem combined with the convenience of the side-by-side arrangement. A large windscreen extending round a greater part of the cockpit serves both pilot and passenger.
A conventional stick and rudder pedal control is fitted, but if desired, dual control can be fitted. All control wires run inside the fuselage and leave the cockpit free. Immediately behind the cockpit is a compartment for luggage, while behind the passenger's seat is a tool compartment.
A wide-track, split- (or non-) axle type landing gear with tripod truss is fitted, the compression member being connected vertically from the wheel up to the front wing spar. This member carries a combined pneumatic and oleo shock-absorber, which takes up the shock with a minimum of rebound. The inner V-struts slope up from the wheels to the fuselage, to which they are hinged. The 26-in. wheels are spaced 6 ft. apart, thus giving good stability when taxying. A leaf-spring tail skid is fitted. The principal characteristics of the Mohawk ''Pinto'' are :-
Span 30 ft. 6 in.
O.A. length 20 ft. 2 in.
O.A. height 6 ft. 3 in.
Chord (root to tip) 5 ft. 6 in. - 5 ft. 3 in.
Wing area 124 sq. ft.
Weight, empty 700 lb.
Disposable load 500 lb.
Total weight 1,200 lb.
Weight per square foot 9-6 lb.
Weight per horse-power 20 lb.
Speed range 35 - 110 m.p.h.
Climb 800 ft./min.
Cruising range (90 m.p.h.) 4 hours.

The Mohawk "Pinto," constructed by the Mohawk Aircraft Corp., of Minneapolis, is a two-seater low-wing cantilever monoplane, fitted with a 45 hp. "Velie" engine, of decidedly pleasing appearance. We understand that the makers are experimenting with other types of engines, but are not permitted to use an engine exceeding 250 lbs. in weight. The wings, employing U.S.A. 35 (modified) section, have box spars and solid ribs, and are constructed of selected spruce, Haskelite plywood, and Macwhyte tie rods. The fuselage is made of C-M. steel, and the undercarriage is of the non-axle type, consisting of two V's carrying the wheels and attached to the fuselage and a vertical "Gruss Air Spring" shock absorber extending from the wheel to the wing. Characteristics :- Span, 30 ft. 6 in.; O.A. length, 22 ft.; wing area, 124 sq. ft.; weight, empty, 850 lbs.; total weight, 1,350 lbs.; speed range, 35-100 m.p.h.; climb, 650 ft. per min.; cruising range, 4 hrs

THE CHICAGO AERO EXPOSITION: One of representative types of aircraft out of the seventy odd on view - (2) Mohawk "Pinto" light monoplane (60 h.p. "Velie")

THE MOHAWK "PINTO" MONOPLANE: Three views of the American light plane, fitted with a 60-80 h.p. Detroit "Aircat" engine, designed for the private owner. The pilot and passenger are seated "side by side in tandem" - in other words, their seats are slightly staggered.

A dismal day in the life of Frank Blazek. His Pinto spun during a turn on finals for Plainfield, New Jersey, putting Blazek in hospital for seven weeks. A spectator found the pilot’s pocket camera by the wreck and took this photograph!