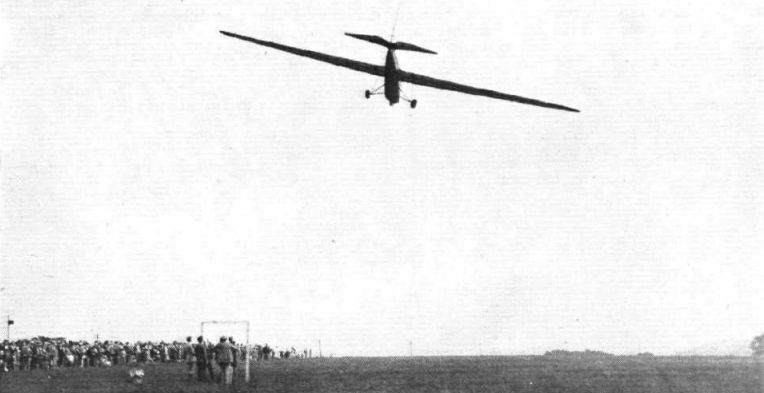 ANEW HIGH EFFICIENCY GLIDER. - Airspeed, Ltd., of Piccadilly, York, have recently constructed the "Tern," a glider which promises to uphold the prestige of English aircraft designers in this particular market. Mr. N. S. ДальшеMore>>> Norway and Mr. A. Hessell Tiltman are the joint Managing Directors, and Mr. Norway is primarily responsible for the design. As will be seen from the photographs, the glider is of the full cantilever type, with a high aspect ratio and a span of some 50 ft. It has already performed very creditably in the hands of various pilots, both English and German, all of whom have been loud in its praises. The photographs show various parts of the "Tern" under construction; that of the wing depicts very clearly the Warren girder drag bracing, so arranged as to provide exceptional torsional stiffness. This bracing consists of two flanges separated by the full depth of the main spar, which is considerable, since the wings are of cantilever construction joined by spruce lattice members. As a further help towards this stiffness and also as a safeguard when handling the machine, the whole of the leading edge is covered in three-ply wood. The ribs are simple and of the normal German construction, with glued three-ply gussets, and in fact German practice has been followed very largely in the wing, particularly in points like the trailing edge, the spring landing skid and many other details. In the cockpit arrangements and general make-up of the fuselage, British light aeroplane practice has been followed to a greater extent, thus this cockpit is roomy and particularly comfortable, and is fitted with a proper instrument board carrying an air speed indicator and cross level beneath a Cellon wind screen. The controls are on ball bearings, providing a light and positive control system.
A particular feature of the machine is the ease with which it can be dismounted and assembled. Each wing is detachable from the centre section by taking out two large main bolts, while the aileron controls connect automatically and need no attention whatsoever when dismounting the wings. In a similar way, each tail plane has the elevator permanently attached to it, and thus needs no attention as the elevator control connects itself when the tail plane is assembled. So simple is the whole operation that three men can completely rig and assemble the machine in less than 10 min. In a recent attempt Herr Magersuppe flew the "Tern" under record conditions for a distance of 84 miles from Ravenscar to Scarborough. After gaining a height of some 300 ft. he flew over the cliff edge in the rising current, but was unable to cross the town of Scarborough and had to land upon the beach, which he did quite safely.

Competing at Dunstable - the Tern, built by the Airspeed Company in their York days. Family resemblance is seen in the rudder.