The four Caudron low-wing, single-seater monoplanes, type C.450 and C.460, have been especially designed and built for this race. The wings are fitted with split flaps. The tailplane is adjustable ДальшеMore>>> in flight and can be operated with, or independent of, the wing flaps. These planes are equipped with the new Renault 6-cyl., in-line, inverted, air-cooled, supercharged direct-drive engine of approximately 310 h.p. They have a maximum cylinder displacement of 7,95 litres. Ratier two-bladed, variable-pitch propellers, automatically adjustable in flight, will be used.
The fuselage has rectangular sections, with a semi-elliptical bottom and a semi-circular top surface. It is equipped with fuel tanks having jettison valves, and the pilot's seat is fitted with a sliding windshield. The engine mounting is attached to the fuselage with four bolts.
On the type 450, the undercarriage is a fixed one, of the cantilever, split-axle type, with independent wheels, 420 X 150, which are fitted with "spats." Charles shock absorbers are used.
On the type 460, the undercarriage is retractable. It is also fitted with independent wheels, 420 X 15, and is equipped with Messier oleo-pneumatic shock absorbers. The retracting mechanism consists of automatic jacks, Charles type. The undercarriage is automatically locked in place when once raised in position.
The controls are of the semi-rigid type mounted on ball bearings, and are statically balanced.
The wings, tail and fuselage are constructed of spruce and birch plywood, and covered with fabric. Electrically welded steel tubes and a high-tensile light alloy are employed in the construction of the engine mounting. The engine cowling and fuel tanks are made of magnesium. Special dopes are used.
The general characteristics of the Caudron types C.450 and C.460 are as follows:- Wing span, 6,75 m. (22 ft. 2 in.); length, 7,125 m. (23 ft. 4 in.); height, 1,8 m. (5 ft. 11 in.); wing area, 7 sq. m. (75.35 sq. ft.); weight, empty, 520 kg. (146 lb.); useful load, 355 kg. (73 lb.); total weight, 875 kg. (1,919 lb.).

ARTISTRY: A Flight photographer's impression of the Caudron C.450 which won the Deutsch de la Meurthe Cup Race this year. It is most effectively displayed at the Paris Aero Show. 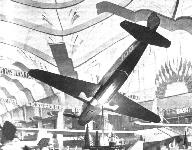 Interesting primarily as an example of the type which, in the hands of M. Detroyat, put up such a remarkable show at the U.S. National Air Races, the Caudron Type Coupe Deutsch strikingly illustrates a phase of the battle between sheer efficiency and practicability from the pilot's angle.

THE LATEST VERSION: The Caudron C.460 has a retractable undercarriage.

THE MOUNT OF THE CHAMPION. Delmotte's Caudron for the forthcoming Coupe Deutsch contest (May 19) is similar to that in which he secured the world's landplane speed record early this year with 314 m.p.h. The most noticeable alteration is the retractable undercarriage.

BRINGING IN THE WINNER: The Caudron C.460 is fitted with a supercharged Renault 6-cylinder in-line air-cooled engine of about 310 h.p.

EXPOSED IN PARIS: A mock-up Morane fighter leads the racing Caudron C-460, a winner at last year's U.S. National Air Races, through one of the halls in the Salon D'Aviation. Whatever the criticisms aimed at some of the Exhibition interiors, there can be no quarrel with this one.

CUP-CONFIDENT? M. Delmotte, seated in the Caudron C.460 which he is to fly in the Coupe Deutsch, makes certain that there are no obstructions at the forward end of his throttle quadrant.
<<   0/0   >>