MILITARY aircraft design is largely governed by the requirements which are paramount in air policy at any given time. If the ДальшеMore>>> policy changes, the design of military aircraft changes with it. Hitherto climb and extreme manoeuvrability have been held to be the greatest necessity. Now that great speed has also become a necessity, several designers have turned to the monoplane type.
The latest to do so are the Bristol designers, and our photographs show the results. The Bristol single-seater fighter is a low-wing cantilever monoplane of all-metal construction, with stressed-skin covering. The low frontal area is well shown in the front view at the top of the page. Two objects are achieved by giving the wing roots a downward slope. The angle between the upper surface of the wing is less acute, and the distance from wing to ground is reduced, giving short undercarriage legs.
The wheels retract only partly into the wing, a curious "knee joint” being used, which is somehow reminiscent of the front legs of an elephant. When raised they do, however, form faired projections, so that the drag is probably very low. Some extra speed is also gained by providing a sliding transparent roof over the pilot’s cockpit, and altogether the new Bristol is certainly one of the fastest British aeroplanes in existence. The engine is a Bristol “Pegasus.”
A reasonably low landing speed has been retained by using split trailing-edge flaps.

THE RETRACTILE FASHION SPREADS: A notable feature of the new Bristol Day and Night Fighter, apart from the cantilever low-wing construction, is the use of a retractile undercarriage. The engine is a Bristol "Mercury." 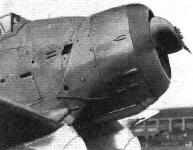