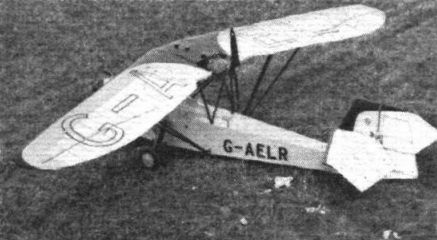 HISTORY has a curious habit of repeating itself. Some of the earliest aeroplanes had the pilot seated in front of the wings and the engine and airscrew behind them. Then one or two pioneers, Mr. (now Sir Alliott) A. V. Roe among them, discovered that the tractor type was more efficient, and in a few years the single-engined "pusher" had disappeared.
There were several reasons for the early pusher being less efficient, aerodynamically, than the tractor. The tail was carried on an open-work girder which offered considerable air drag by reason of its struts and criss-cross wire bracing. Secondly, with the airscrew being behind the trailing edge of the wings, a fairly tall undercarriage was necessary to give sufficient ground clearance for the airscrew and still have the necessary ground angle on the wings.
In modern times, the pusher can be made a good deal more efficient than was the pusher of the early flying days, although the difference in efficiency between pusher and tractor is probably at least as great as ever it was, owing to the progress made in design. Efficiency is not, however, the only desirable feature of an aircraft, and if a small degree of performance is sacrificed, several very pleasant and desirable features can be obtained in exchange. In this connection it is interesting to recall that several of the private owners who contributed their views to Flight last week did not lay great stress on performance.

An interesting new pusher monoplane is now being built at the Dunstable works of Dart Aircraft, Ltd., who were formerly known as Zander and Weyl. As the general arrangement drawings show, the new Dart single-seater resembles somewhat the little monoplane which Mr. Lee Murray and Mr. W. S Shackleton produced some years ago. The S.M.1 was, however, a two-seater, while the Dart is a single-seater. Also, the Dart shows a pronounced sweep-back of its wings, while the S.M.1 had straight wings.
The parasol wing arrangement was chosen largely because it enables the petrol tank to be carried in the centre-section and so provides direct gravity feed. The sweep-back was incorporated to increase stability, and also helps in that the machine can be made to trim properly without a very long nose to carry the pilot. The very low position of the fuselage, and the fitting of a skid under the nose, should make it almost impossible to turn the machine over when landing on rough ground. In this connection it would appear from the drawings that the wheels are a little far forward and that as a result there may be some delay in "getting the tail up." Doubtless this placing of the wheels was chosen after due consideration, and will probably be offset by the high position of the thrust line, which will help to raise the tail.
While on the subject of the thrust line, attention may be drawn to the fact that the engine is so mounted that the slipstream is directed on to the tailplane. When the engine stops, the disappearance of the slipstream is expected to result in a reduction of the down-load on the tail, thereby preventing any tendency of the machine to stall.
From a structural point of view the Dunstable Dart is a very simple piece of work, wood being the chief material. The fuselage is a flat-sided box, and the wing is of orthodox construction, with the box-section front spar and the ply-covered leading edge forming a D-section tube, very strong in torsion. The rear spar is placed fairly far back in the wing section, and carries large ailerons.
A remarkably good view should be obtained from the pilot's seat, and owing to the proximity to the ground he should have little difficulty in judging his landings. The seat is adjustable in a fore-and-aft direction. In this way a certain degree of automatic trimming should also be obtained, assuming that a tall pilot will also be a heavy pilot and the rearward position of the seat helping to shift the c.g. back.
The first machine, which is expected to be flying in a few weeks, will be fitted with a 34 h.p. Bristol Cherub engine, but as this unit is no longer being manufactured, alternative engines of approximately the same power and weight can be fitted.
With an overall wing span of 29ft. 7 1/2 in. the wing area is 114 sq. ft. When the wings are folded the width is reduced to 10ft., and the length is then approximately 24ft., so that the machine can be stored in a shed measuring 12ft. X 25ft.
The estimated tare weight of the Dart is 485 lb. and the gross weight 700 lb., leaving 215 lb. for disposable load (pilot, luggage and fuel). The estimated top speed is 87 m.p.h. and the gliding speed, near the ground, 31 m.p.h. The price at which the Dart will be marketed has not been decided yet.

SINCE Flight published, in the issue of April 30 this year, a description of the Dunstable Dart, a new company has been formed and the machine has been re-named the Dart Pup. This interesting little lightweight has now been flown for several hours by Mr. A. R. Weyl, the managing director, and he reports that its flying qualities are excellent and that it is "as fool-proof as an aeroplane can be."
As might be expected, the pronounced sweep-back gives a high degree of inherent stability, which is, incidentally, positive about the three axes; when stalled, the Pup sinks on an even keel and the behaviour in gusty weather is reminiscent of that of a full-size aeroplane. The actual landing shows up no vices, the machine is directionally stable on the ground, and the run after touching-down is given as about forty yards.
Between full-throttle flying and the throttled glide no change in trim occurs, so that, in future machines, the tail-trimming gear will be dispensed with. Needless to say, the position of the pilot gives him a perfect view in the essential forward direction - in fact, since the machine is of the parasol type, the all-round view should be as good as, or better than, that obtained in any machine at present on the market.
For the moment the Pup is fitted with a 27 h.p. Ava two-stroke engine, instead of the 34 h.p. engine for which it was designed, but the maximum speed appears to be rather more than 75 m.p.h. The take-off, somewhat naturally, is not as good as it should be. The machine was, it will be remembered, designed by Mr. Weyl with the assistance of Capt. A. H. Curtis.

The new Pup as it appears in half-plan view, showing the pronounced sweep-back.