IN the King's Cup Race this year an attractive little sports monoplane, then known only by the Phillips and Powis works number M.5, was flown by its designer, Mr. F. G. Miles. Since that time the company has decided to put this type on the market as a fast sporting machine for the private owner and as a military trainer. One of the most attractive of its abundant qualities is the low landing speed of 42 m.p.h. which it possesses in spite of its maximum speed of 180 m.p.h. with a high-compression Gipsy Major engine.
In general appearance the machine somewhat resembles the Hawk Major, but it is a rather smaller type with a span of only 28ft., whereas the Hawk Major's span is 33ft. The height also is considerably less. Structurally it is a typical Miles product, wood being used throughout, the covering of fuselage and wings being plywood.
In the Sparrow Hawk the centre section extends only for the width of the fuselage and the undercarriage legs are attached to the wing somewhat further outboard than in previous designs. The machine may be used either us a single-seater or a two-seater, the front cockpit being covered over in the former case. Miles split trailing-edge flaps are included as standard equipment. The price is L825.

N.B. - The above figures are for the machine with the front cockpit covered in.
With the standard Gipsy Major the maximum and cruising speeds are reduced by 5 or 6 m.p.h. but the range is increased to 540 miles.

Speed and comfort. The Miles Sparrow-Hawk does 175 m.p.h.

The prototype Sparrow Hawk in the hands of Flt. Lt. "Tommy" Rose.

Real racing: The scratch man, W. Humble (Hawk Six), truly vertical as he rounds the grandstand turn at Hereford. He averaged 184 m.p.h. over the ninety-mile course.

From June 1945 the M.5 Sparrowhawk G-ADNL was owned and flown by test pilot Geoffrey Alington and it was raced frequently, coming first in the 1950 Circuit of the Isle of Wight.

A view of the Hawk M.5, of which F. G. Miles is both designer and pilot.

The Miles "Hawk M.5," which, entered by Mr. G. A. Hebden, will be flown by Mr. F. G. Miles. This machine is a standard two-seater, but has a reduced wing area, faired-in front cockpit and high-compression "Gipsy Six" engine.

Victor Smith and the Miles M.5 Sparrowhawk in which he competed in the 1936 Schlesinger Race. He was forced to retire at Cairo following forced landings at Skoplje and near Salonica. G-AELT became ZS-ANO and in 1940 became 1427 in the South African Air Force. 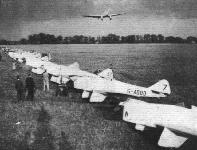 PREPAREDNESS REWARDED: All the eleven Miles Hawks and the two Miles Falcons lined up for inspection by a large number of guests on the day before the King's Cup entries were due at Hatfield for presentation before the scrutineers. The firm will probably go down in history as the first to be completely ready for the race, and their preparedness was certainly rewarded with four machines in the first five of the final. It was extraordinary that all the machines could have been brought for the presentation as many of them had already been delivered. During the afternoon Mr. Miles demonstrated the manoeuvrability of the New Hawk M.5. with a display of superbly executed aerobatics.

Homage to E. F. Walter's Hawk and F/O A. E. Clouston's Sparrow Hawk (scratch) at the start of the Contact race.

Monday's preparations - a pleasant scene at Portsmouth airport. In the foreground is Victor Smith's Sparrow Hawk.

F/O. A. E Clouston clears up a matter of regulations before the start with the support of his Miles Sparrow Hawk, which incidentally, put up fastest time.

The trim monoplane below it will be recognised as one of our Miles Sparrow Hawks. This also turned up at the National Air Races.

Fred Miles, who competed in Sparrowhawk G-ADNL; the aircraft was designed by his wife Blossom less than two months before the race.

Night shift: Lt. Cdr. C. N. Colson, works manager of Phillips and Powis, submerging into the depths of Victor Smith's Sparrow Hawk for an inspection of the repairs made during Saturday night to the tank, a head of six feet of petrol is being used as a test. 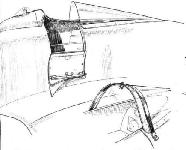