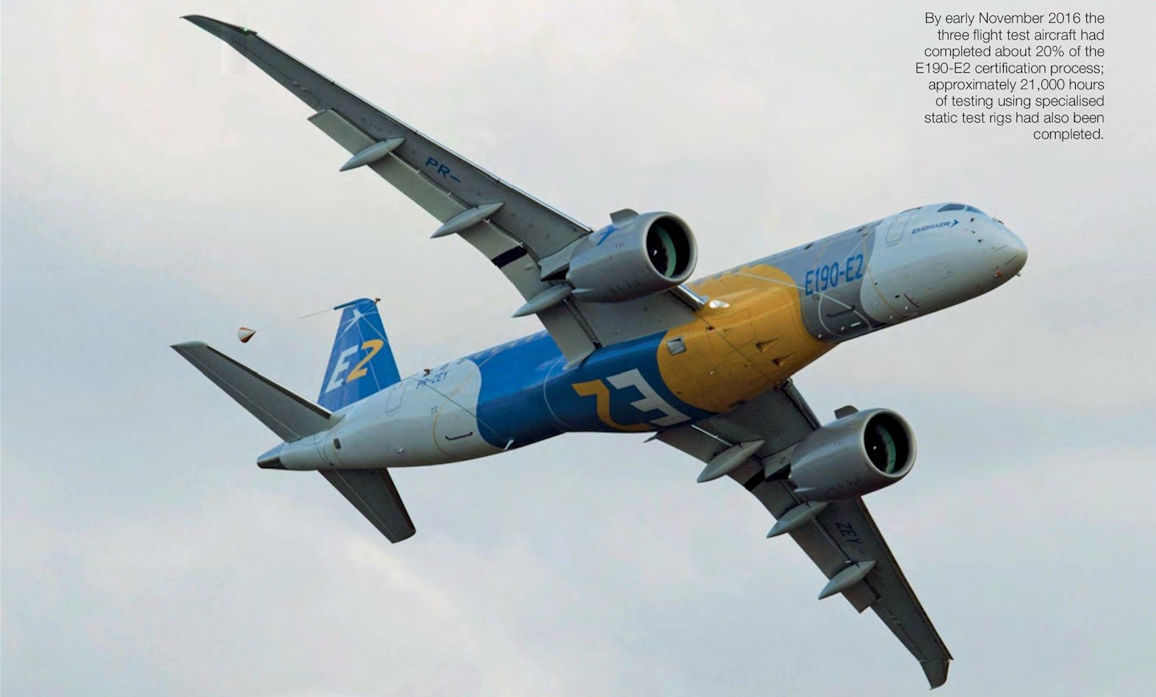 By early November 2016 the three flight test aircraft had completed about 20% of the E190-E2 certification process; approximately 21,000 hours of testing using specialised static test rigs had also been completed.

E190-E2 PR-ZEY returning after its maiden flight, which lasted three hours and 20 minutes. Embraer is working towards a 2018 service entry for this first variant.

Two of the three E190-E2s involved in the flight test campaign: these aircraft will be joined by a fourth prototype in early 2017.

Embraer flew E190-E2 prototype PR-ZFU (c/n 19020002) to Changi for static display, where it was unmissable in an eye-catching Tiger paint scheme applied to the forward fuselage.

FIA organisers have expressed their regret in cancelling the 2020 edition, but have said: "We are determined to continue to work together and will ensure the Farnborough International Airshow returns in 2022 better than ever."

The initial E190-E2 on the assembly line; its first flight is scheduled for 2016.

Air Astana's initial E190-E2 in its snow leopard livery, designed by Embraer in the style of the 'Profit Hunter' nose art that features on the manufacturer's E-Jets E2 test and demonstration aircraft, and applied by hand to the aircraft.

Helvetic Airways is the second European operator of the E190-E2.

Helvetic abandoned its typical LCC branding in 2006, opting instead for the highly distinctive Swiss flag

About every ten seconds (on average), an aircraft manufactured by Embraer takes off somewhere in the world, transporting more than 145 million people a year

Helvetic was the first E2 operator to fly into London City. “We are convinced the E2 is perfectly suited to the requirements of business customers flying between the financial centres of London and Zurich,” said Tobias Pogorevc during the inaugural flight

Embraer handed over the initial customer E190-E2 to launch operator Wideroe on April 4, 2018. 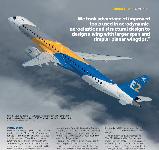 With the E190-E2 delivered, Embraer now turns to completing the flight testing and certifying the larger E195-E2, targeted for the first half of 2019.

The prototype E195-E2 PR-ZIJ (c/n 1902005) during the flying display at Paris, an event during which Embraer announced orders for 51 of its E-Jet family aircraft.

Embraer now describes its E-Jets E2 range, which includes the E195-E2, pictured here on an early test flight, as crossover jets able to be used for different roles.
THE SECOND member of the performance tests and the other Embraer E-Jets E2 family, the E195-E2, has received its type certification from three regulatory agencies: ANAC (the Brazilian Civil Aviation Agency), the US Federal Aviation Administration and the European Aviation Safety Agency.

The E195-E2 at the show was resplendent with an eagle painted across the nose, a reference to Embraer calling the E-Jet the ‘Profit Hunter'.

Embraer is testing the E175-E2, but there are no orders for the aircraft yet.

Among structural differences between the first and second-generation E-Jets is a new trailing arm architecture for the main landing gear, which Embraer says is less susceptible to shimming and corrosion.

Each of the new E-Jet variants has a new, higher aspect ratio wing, which is more aerodynamically efficient and tailored to the size of the aircraft.

All Helvetic pilots have the ability to fly both the E2 (pictured here) and E1, according to CEO Tobias Pogorevc

UK firm PriestmanGoode has been involved in the cabin that includes 18.3 inch-wide seats in economy, with two seats on either side of the aisle.

Compared to the earlier E-Jet the overhead stow­age bins have been enlarged and can accept the standard roll-on cabin bag, stowed wheels first.

PriestmanGoode's products have not just been limited to airlines, as it has also worked with aircraft manufacturers, including Embraer to give a sense of space on its new E2 jets.

A render of Embraer’s E2-Jet family of aircraft

Embraer has commonality with the current E-Jets as a major focus in the E2 programme.

Leasing firm ILFC is one of the E-Jet E2's earliest customers.

Norwegian carrier Wideroe has been confirmed as the launch operator of the E195-E2 next spring.

THE SPANISH regional airline Binter Canarias has become the first European carrier to order the Embraer E195-E2, the largest model in the new E-Jets E2 range.
<<   0/0   >>