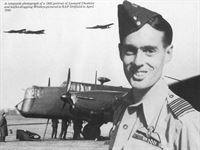 A composite photograph of a 1945 portrait of Leonard Cheshire and leaflet-dropping Whitleys pictured at RAF Driffield in April 1940.

Another view of three 102 Sqn Whitley IIIs on a reconnaissance flight from RAF Driffield in March 1940. The squadron operated Whitley Vs from November 1939 until February 1942, by which time Halifax IIs were already taking over.

IN CAMP. The Oxford University Air Squadron believes in putting in as many individual cross-country flights as possible. In this photograph a member of the squadron is signing for his aircraft before starting off from Ford Aerodrome on a cross-country in a Hart Trainer.
Leonard Cheshire, left, signs out before a flight in Hawker Hart K3756 during an Oxford University Air Squadron summer camp at Ford in July 1938.