The Air Ministry initially ordered the wooden-hulled Southampton Mk I "off the drawing board" in August 1924, the first production example making its first flight on March 10, 1925. An anodised light-alloy metal hull was developed for the Mk II, the first of which was S1149, seen here, and which, in company with S1150, S1151 and S1152, served with the FEF.

With its single stripe visible just forward of the rear hatch, S1149 pushes on under the power of its pair of 500 h.p. Napier Lion VA “broad arrow”-configuration 12-cylinder engines. The FEF Southamptons’ fuel tanks were increased to 250 Imp gal each and the oil tanks to 18 Imp gal each, in order to provide the longest possible range.

Undergoing a thorough overhaul, cleaning and repainting, S1152 is seen here on the beach at Karachi on December 10, 1927. Four days later, the Southamptons were inspected by the Air Officer Commanding, India - Air Vice-Marshal Sir Geoffrey Salmond - who joined Cave-Browne-Cave and Sawyer aboard S1152 for the 475-mile flight south to Bombay on December 15.

After a bumpy flight from Port Swettenham through thunderstorms over the Johore Straits, the Flight arrived at Singapore in light rain at 1705hr local time on February 28, 1928, before being brought ashore over the next few days. Here a landing party prepares to haul S1150 on to dry land at Singapore for overhaul and repainting.

The Southamptons of the Far East Flight remained at Singapore, where they underwent another major inspection and overhaul, until late April 1928, when they were rolled out ready for the next stage of their epic aeronautical adventure, which would see them continue on through the Dutch East Indies to circumnavigate Australia.

THE ROYAL AIR FORCE FLYING-BOAT CRUISE: One of the Supermarine-Napier metal-hull flyingboats, as employed in this Far East flight, flying over the land between Akyab and Rangoon.
Southampton S1150 - two stripes - over the Burmese coast between Akyab and Rangoon, described in the Flight’s Log as “picturesque, rugged and well wooded, with many rivers and bays which appeared suitable for emergency alighting places”. On the leg from Bombay to Mangalore on December 27, the Flight undertook a search for the wreck of the Jayanti, a steamer that had sunk in a cyclone on November 12. Unfortunately, no trace of the vessel was seen.

The four Southamptons moored on the Tigris at Hinaidi, where the FEF stayed during November 6-10. The Flight’s Log records that on November 8, “King AH [Faisal I] and his Prime Minister inspected the flying-boats, and the King was taken for a short flight over Baghdad in S1151, ” during which he “expressed great pleasure”.

The spirit of James Cook - Southamptons S1149 and S1151 climb away from Plymouth Sound on the first leg of their epic 11-month journey to Australia via Singapore, on October 17, 1927. With Supermarine’s S.5 floatplane racer having won the Schneider Trophy for the UK the previous month, the manufacturer’s reputation was burnished further by the prospect of another major achievement in the conquest of the air.

Three of the Flight’s four Southamptons moored at one of the European stops, possibly Phaleron Bay in Athens, where, according to the Flight’s Log, “the winds were light northerly”, on which the flying-boats “rode quite safely and comfortably”. The next stop was Aboukir in Egypt, where routine inspections were completed.

Southampton S1152 - with no stripes - undergoes engine maintenance, probably during one of the stops in the Middle East. This view shows the engines’ increased-area radiator surfaces, nearly 50 per cent bigger than on standard UK-based Southamptons; this increased area kept the coolant to a maximum temperature of 76°C.

THE ROYAL AIR FORCE FLYING-BOAT CRUISE: Some of the non-paying passengers (barnacles) being scraped off the hull of one of the flying-boats at Trincomali, Ceylon.
Blistering barnacles - literally. After arrival at Trincomalee, Ceylon, on January 12, the Southamptons were taxied in turn the following day to shallow water in front of the naval sick quarters and secured to a small pier there, at which point the crew and some locals set about removing the troublesome barnacles and weeds. 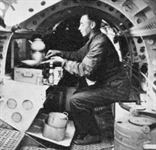