Cathay was founded in 1946 and started operations with a single DC-3 called Betsy, on charter and freight flights.

The AW101 is equipped with electric blade and tail fold for ship hangar stowage.

During operations Atalanta and Ocean Shield the AW101 undertook sea surface control and intelligence, surveillance and reconnaissance missions along the coast of Somalia looking for vessels involved in piracy and smuggling. 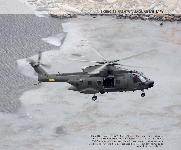 The 3° Gruppo Elicotteri based at NAS Catania recently passed the 100,000 flight hour milestone, of which, about 6,000 were dedicated to 1,900 rescue missions in support of the community.

One tasking for 3° Gruppo Elicotteri is to supply helicopters and combat-ready crews to embark onboard the largest ships in the Italian Navy Fleet.

Former commanding officer of 3° Gruppo Elicotteri, Cdr Paolo Florentino is now the station commander of NAS Catania. Cdr Florentino has flown a variety of types including the AB212ASW, SH-3DASW and AW101. He has achieved over 2,000 hours and 700 deck landings.

The AW101 s HELRAS II sonar and its radar are capable of detecting and identifying targets of interest more efficiently than the sensors fitted to earlier Italian Fleet Air Arm helicopters.

AW101s assigned to 3° Gruppo Elicotteri operated from ITS Garibaldi during NATO's Operation Unified Protector. The squadron conducted anti-surface warfare and electronic warfare missions, while providing round-the-clock readiness with an AW101 used as the airborne mission coordinator for personnel recovery missions.

Conformal fuel tanks provide an additional 1,500 gallons of fuel for the F-15 Baz.

F-15C 575 undergoes final checks from the ground crew before a mission.

Close-up of the training rounds carried by an F-15C: radar-guided AIM-7M Sparrows on the fuselage and Python 3 infrared-guided missiles under the wing. Because the Python 3 is smaller than the AIM-9 Sidewinder, carriage requires Magrefa adaptors.

All models of Israeli F-15s have been upgraded to the same standard under the Baz AUP programme carried out between 1998 and 2005.

F-15A 620 (US Air Force serial number 72-0116) was one of the first four FSD aircraft to arrive at Tel Nof in December 1976. Note the small dorsal airbrake, typical of the pre-production series airframes.

F-15A 667 wears a kill symbol for a Syrian Air Force MiG and the name 'Cyclone', in Hebrew.

SH-90A MM.81951/'3-05' flying over the hills near the base at Luni reveals the shallow radome of the Thales ENR search radar, under the fuselage.

Following a low-level mission over the sea, an SH-90 taxies through the shower to wash away salt water from the helicopter.

The nose of an SH-90A showing the different sensors of the Elettronica ELT ESW system and Sagem's Artemis FLIR.

The two consoles used by the systems operators are comfortably located side-by-side in the cargo cabin.

The cockpit of the SH-90 is dominated by five large 203 x 203mm colour MFD screens made by Thales, which display all flight, aircraft and mission systems information. 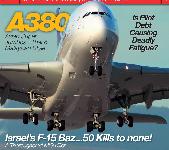 A380 9M-MNC (msn 084) at London-Heathrow which was the first route flown by Malaysia Airlines' super jumbo.

The Royal Silk business class section aboard a THAI A380.

Each THAI A380 is fitted with 507 seats, 12 of which are designated first class and located in the forward part of the upper deck.

A lie-flat seat within the first class compartment in the forward part of the upper deck of a THAI A380.

All six of Cathay's North American routes, four to the US and two to Canada, are now served by Boeing 777-300ERs.

A crucial element of Cathay's operation is a reputation for comfort and style in business class where the seats on Boeing 777-300ERs lie flat, are 82 inches long and encased in moulded shells.

After initial operational flight tests were complete at Pratica di Mare, the first two M-346s built for the Italian Air Force returned to Alenia Aermacchi's plant at Venegono. The aircraft will be updated to full trainer configuration for service with the 61st Wing at Lecce AB, home of the air force flight school.

Alenia Aermacchi's production process is designed to complete up to four M-346 aircraft per month. Lead-time to build an aircraft (producing parts, joining the major parts and final assembly) at full-rate production is 12 months.

The beautiful sleek symmetry of the frontal view of a fully-prepped M-346 ready for the runway.

Commander Olinto Cecconello, who has over 9,000 flying hours including more than 700 with the M-346, undertook the maiden flights of both M-346 prototypes.

The Republic of Singapore Air Force is the first M-346 export customer.

To date over 2,000 hours have been flown by the two M-346 prototypes and pre-production series aircraft.

At the beginning of January 2012, the first two M-346s (designated T-346A by the Italian Air Force) were delivered to the Reparto Sperimentale di Volo (Flight Test Wing) at Pratica di Mare AB for the type's initial operational test and evaluation.

A test pilot from 311° Gruppo of the Italian Air Force Reparto Sperimentale di Volo carries out pre-flight checks on an M-346 during the type's initial operational test and evaluation.

The current Italian Air Force plan anticipates teaching the first class of students on the M-346 during the first half of 2014.

The pilot-aircraft interface (colour multifunctional displays, head-up display, hands on throttle and stick controls) allows the student to train in a cockpit similar to the frontline fighter aircraft he or she will eventually fly.

In addition to the aircraft, the main elements of the M-346 integrated training system are computer-aided instruction and computer-based training, full mission simulators and part task trainers, as well as mission support stations used for planning and debriefing. 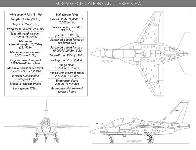 Bulgarian Air Force C-27J 072 is one of three in service with 1/16 Transportna Avio Eskadrila based at Sofia-Vrazhdebna.

The C-27J Spartan is equipped with a digital cockpit avionics suite.

MC-27J mission systems are built on RORO pallets fitted to the cargo floor. One pallet comprises a work station with two control consoles (at the rear) while the second has a 30mm GAU-23 Bushmaster automatic cannon, complete with 500 rounds, and a control console for the gunner.

The C-27J is capable of airlifting up to 62 combat troops, 48 full-equipped paratroopers or 36 stretchers and six attendants.

Two different 10-tube launcher systems are under consideration for the MC-27J: the Derringer Door (right) and Gunslinger (left).

The buzzard motif painted on the external side of the tail of F-15D 733 was adopted in 2002 for Baz AUP-modified aircraft.

Three F-15Ds assigned to 'The Point of the Spear' Squadron lined up on the runway at Decimomannu AB, Sardinia, during Exercise Vega 2010. The unit adopted the red arrow markings on the internal tail surface in 1991. Aircraft 979 is equipped with an Elta EL/L-8222 ECM pod on the forward fuselage station.

F-15B Baz 111, in the colours of 'The Point of the Spear' Squadron, is a former US Air Force aircraft delivered under the Peace Fox V programme between 1991 and 1992.

The AW189 SAR variant will play a pivotal role in the provision of search and rescue in the UK.

The eight-tonne AW189 is optimised for the onshore/offshore passenger transport role.

AW189 prototype P4 on a test flight from AgustaWestland's Yeovil facility in Somerset on November 23, 2012.

AW189 protoype PP5 is the one non-instrumented prototype that is closest to a series production standard aircraft, and is likely to be used for instructor training in Italy this spring.

Prototype P4 is instrumented for load certification and is being used to increase the AW189's maximum take-off weight and demonstrate the aircraft's structural capabilities to the European Aviation Safety Agency.

The AW189's cabin design can be configured to meet customer specific requirements and is large enough to accomodate 12 to 18 passengers.

Cathay is accelerating the retirement of its ageing, fuel-hungry, Boeing 747-400s.