This photograph of North American P-51 Mustang racer Roto-Finish with its engine cowling removed amply demonstrates how the ‘‘Tube Merlin” installation got its name. The shiny chrome tube that replaced the Merlin’s aftercooler and its associated hardware is clearly visible at the aft end of the engine block.

The “Swamp Buggy” - a school bus chassis modified for aero-engine testing - ground-runs the Merlin intended for the first of the tube-equipped Mustangs. Tests revealed that a stock aftercooler could provide suffi­cient cooling only up to about 45lb/in2 MP, whereas the tube system allowed manifold pressures of up to 69lb/in2.

Гоночный «Мустанг» «Roto-Finish», прервавший в 1972 году цепочку побед «Конквеста» в воздушных гонках
Following its stint with Chuck Hall as Miss R.J., N7715C was acquired in 1971 by Gunther Balz, who repainted the aircraft and named it Roto-Finish after its chief sponsor. The following year it finished first in the Unlimited Championship race at 416 m.p.h. (670 km/h), before being sold on to a new owner, John Sliker, in 1973.

The first Mustang to be fitted with a tube installation was P-51D N2869D in 1966. The aircraft had been raced as a stock machine as Bardahl Special/Race 8 during 1964-65, but carried a new name, Challenger, and various airframe modifications for the 1966 season.

Another view of the tube system installed in Roto-Finish. In February 1974 it went to a new owner, Ed Browning, who renamed the aircraft The Red Baron and had it fitted with a Rolls-Royce Griffon engine and contra-rotating props, the first P-51 to be so equipped. It suffered engine failure and crashed at Reno in September 1979. 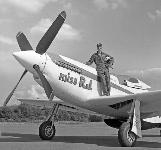