David Jones’s new King Kite on aero-tow at Bourges during the 1988 Vintage Glider Club Rally. His Kite has entirely new wing profiles but otherwise is as close as possible to the original.

John Neilan chats with his crew on the Wasserkuppe, Germany in July 1937. The registration letters on the King kite were added only for the purpose of international travel.
There is something specially attractive about sailplanes on their native heath. On photo is one of the King Kites with a background of Fulda Valley; Mr. J. C. Neilan, one of the pilots of the machine, is second from the left in the group.

The King Kite BGA 304 at the 1937 Wasserkuppe meeting. Shortly after this photograph was taken G-GAAD was a heap of wreckage after spinning in. Pilot Willy Watt escaped unhurt. 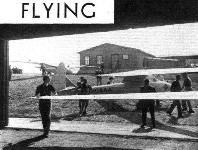 INTERNATIONAL: A scene at the Wasserkuppe on the first day of the International Gliding Competition. In the foreground can he seen Mrs. Ronald Price at the wing tip of her King Kite, while behind is the Hjordis, which is being handled by Messrs. P. A. Wills and J. C. Neilan.