Flight, May 1939
For SERVICE TRAINING

IN view of the modern tendency towards twin-engined or multi-engined aircraft types for most Service purposes, the need for training machines on which crews can obtain ДальшеMore>>> experience not only of piloting but of bombing and gunnery is obvious.
Sqn.-Ldr. G. H. Reid, D.F.C., chief of the Reid and Sigrist concern, has evolved a machine in which the greatest possible number of training features are incorporated. Mr. E. M. Blake, a late former deputy-chairman of Morris Motors, Ltd., had a deep knowledge of the problems connected with designing for quantity production, and his advice, invoked for production and maintenance features, has been found invaluable.
The machine has been redesigned as new ideas were incorporated, and has now been thoroughly flight-tested by Mr. George Lowdell at Desford. It has also been put through official tests at Farnborough, and appears to have no vicious tendencies. There is no dropping of a wing near the stall, the controls are light and well harmonised, and the machine is reported to be difficult to keep in a spin and to tend to pull out of it automatically. In slow rolls there seems to be no appreciable less of height.
In its general aerodynamic design the Reid and Sigrist Trainer is an orthodox monoplane of the twin-engined, midwing type, with twin tins and rudders to decrease the torsional loads on the fuselage and to improve longitudinal stability, as well as making for better single-engined flight. The two De Havilland Gipsy Six II engines are carefully faired into the wing, and a fixed spatted undercarriage is used. The machine is a three-seater, with the seats so arranged that pilot and observer are in direct communication with one another. In addition to affording twin-engined training for pilots, it is equipped for training crews in bombing, navigation, night flying, and in the handling of rear defensive guns.
Seating arrangements are such that the observer is seated between the pilot and the rear gunner. In addition to the rear-gun position, with its hinged windscreen, there is provision for a prone bombing position in the nose of the fuselage. To reach this from the rear gun position the gunner crawls under the floor of the observer’s cockpit. A normal straight rear wing spar would not have left room enough, and consequently the rear spar is curved upwards where it crosses the fuselage. This added a slight complication to the construction, but enabled the fuselage size to be kept down, with corresponding gain in performance.
Structurally the Reid and Sigrist Trainer is fairly straightforward. The wing spar construction is slightly unorthodox in that instead of the usual box-section spar, an “open” type of spar has been used. This takes the form of laminated top and bottom flanges joined by spacing blocks. One advantage of this type of spar construction is that the bend in the rear spar was much easier to incorporate. For the rest, the wing is of normal construction, with ribs, stringers and plywood covering. The slotted flaps and ailerons have metal frameworks and the latter are fabric covered. The tail surfaces are also fabric covered, but are of wood construction.
The fuselage is interesting in that two forms of construction are used. The front portion, where the seats and wing attachments are located, may be said to be boat-built, as will be seen from the sketches. The rear fuselage portion is of normal construction, with formers stiffened with plywood, the usual longitudinal stringers, and plywood covering.
In the prototype machine the two fuel tanks, housed in the wing inside the engine fairings, have a capacity sufficient for 4 1/4 hours, but the production design will have larger tanks, which will give a duration of 5 1/2 hours. The Gipsy Six II engines drive De Havilland two-position variable-pitch airscrews. Flight tests have shown that a height of 3,000ft. is maintained on one engine.
Full performance figures are not yet available, but the Reid and Sigrist Trainer has, with a tare weight of 3,000 lb. and a normal category gross weight of 4,900 lb., a cruising speed of 190 m.p.h. at 2,100 r.p.m. at 6,000ft. For aerobatic flying the maximum gross weight is 4,100 lb. The stalling speed with the slotted flaps down 20 deg. is 57 m.p.h., and the initial rate of climb is 1,330ft./min. This is at full normal gross weight. With flaps down 20 deg. the take-off run is 534ft. and the landing run is 600ft.
Visitors to the Royal Aeronautical Society’s Garden Party at the Fairey aerodrome at Harmondsworth next Sunday will have an opportunity to see the Reid and Sigrist Trainer, which will be specially demonstrated between 2 and 3 p.m.

The picture should be studied for points in the design such as the slotted flaps and ailerons and the very clean underside.

There is something very businesslike about the Reid and Sigrist Trainer, as these three views indicate.

The Reid and Sigrist Trainer; Sqn. Ldr. Reid will, perhaps, be recognised standing nearby 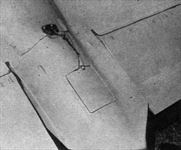 A tail parachute - with a 700-lb. pull - was fitted for the early spinning trials. It was neatly stowed, with one release for the canopy and another to cast it free.

Pilot, observer and rear gunner are placed close together under the transparent roof. The cover over the pilot’s cockpit slides back, and the rear gunner’s tilts up to form a windscreen when he is using the gun.

This skeletonised view of the R. and S. Trainer gives a good idea of the structural features of the design. Note particularly how the rear spar is curved inside the fuselage to enable the rear gunner to get to the prone bombing position.