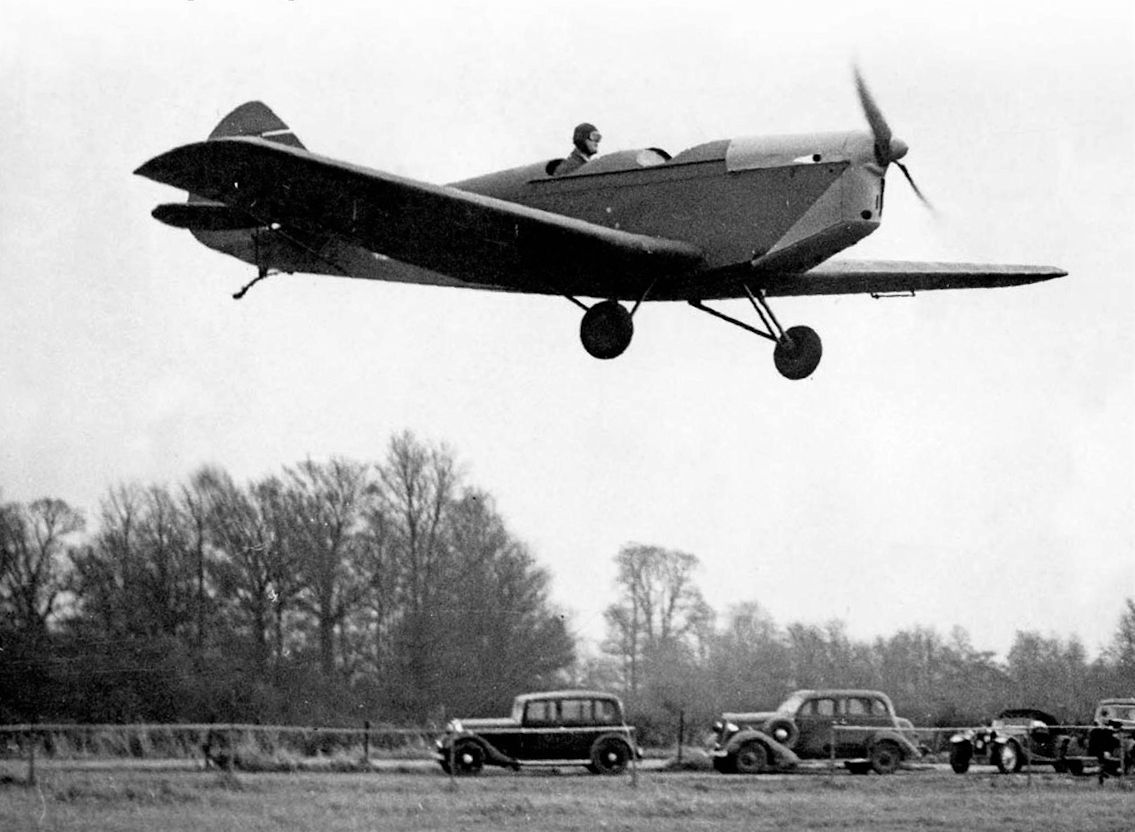 IT is very refreshing, in these times, to be able to place on record the production in this country of a new type of aircraft. To Mr. D. M. K. Marendaz ДальшеMore>>> falls the credit for having enabled Flight to publish a description of the first new British aeroplane of the war era. The machine is a two-seater trainer, and as the photographs show, it conforms to the popular conception in that it is a low-wing cantilever monoplane.
The Marendaz Trainer has been designed for bringing up pupils on a type of machine which will represent the larger and more powerful types which they will be called upon to fly later. Yet in spite of the fact that it is a low-wing monoplane, the designer has aimed at retaining in its features and characteristics the virtues of the biplane training machine. This has been aimed at by a careful choice of wing section, c.p. and c.g. position.
Structurally the Marendaz Trainer is a perfectly orthodox aeroplane, with stressed wooden skin, two-spar wing construction, and the usual small number of stainless steel fittings where highly stressed wooden parts are joined together. In the wing construction it is to be noted that the plywood covering extends over the whole wing area, i.e., one does not find the fabric covering aft of the rear spar which is so often used.
Any in-line engine of from 80 h.p. to 150 h.p. can be installed. The prototype has a Cirrus Minor, and the figures which follow refer to the machine so powered. The machine, it should be mentioned, will be marketed with a Fully Aerobatic C. of A.
The main dimensions of the Marendaz Trainer are: Length o.a. 22ft. 4in.; wing span 34ft.; wing area 157 sq. ft.; The weight empty is 960lb. and the loaded weight 1,500 lb. The disposable load includes pilot, passenger, luggage, 13 gallons of petrol and 2 gallons of oil. At a cruising speed of about 95 m.p.h. this gives a range of 350 miles. Extra tanks can be fitted to bring the range up to 700 miles. The wing loading is 9.5 lb./sq. ft. and the power loading 15.5 lb./h.p. With these loadings the maximum speed is in the neighbourhood of 124 m.p.h., the stalling speed 37 m.p.h. and the landing speed 40 m.p.h. The initial rate of climb is claimed to be about 1,000ft./ min., a figure which appears to be on the optimistic side in view of the relatively high power loading.
In order to avoid the complication of moving parts, Mr. Marendaz has used built-in leading-edge slots near the wing tips. These are of wood construction, with plywood covering and spruce formers. The steel plates at the wing roots are exceptionally long, a large number of bolts being provided so as to give adequate bearing area.
An unusual feature of the Marendaz Trainer is the type of undercarriage used. The legs are made of heavy-section square tubing, and the vee is attached at its upper ends to front and rear spars respectively, and swings laterally around a line joining these two points. At each point is a housing which holds a Silentbloc bush. The pins are 4in. long and of 3/4in. diameter. At the apex of the vee formation is a third Silentbloc bush of large area, placed on top of a chrome vanadium stub axle, to which is secured a radius rod running up to the front spar of the centre-section. The rod is located in a housing which accommodates landing and rebound springs.
The two units of the undercarriage are independent, and the wheel track is exceptionally wide (93in.), so that one wing tip has to be 10ft. off the ground before the other touches, when the machine is standing on one wheel.
Another unusual feature is the tail skid, which is so mounted that the bottom of the fuselage can be covered, so that no dirt can accumulate inside. The skid is mounted on a full cantilever leaf spring of silicon manganese. At its centre point it is allowed to rotate around a Silentbloc bush. The forward end is attached to a bracket, and the flexing is accommodated through the medium of a roller.
The two petrol tanks are placed, one on each side, inside the centre-section stubs. They are interconnected, and all piping is so arranged that it does not pass through the cockpits. This makes for ease of inspection and also reduces fire risk.
Mention has already been made of the fact that the wing section has been carefully chosen. This includes consideration of absence of “float,” usually a characteristic of a clean, lightly loaded, low-wing monoplane. If desired, flaps can be fitted, but Mr. Marendaz does not regard them as necessary for ab initio training.

IN Flight of November 23 details were given of a new Marendaz trainer. This is a tandem two-seater low-wing monoplane of more or less conventional appearance, though some details are interesting, as, for example, the undercarriage, the wheels of which roll sideways during a landing.
With a Cirrus Minor engine the top speed is about 124 m.p.h and the landing speed 40 m.p.h.

Robert Wyndham aloft in the sole Marendaz Trainer, G-AFZX, in November 1939. Could it be the same Robert Wyndham who gained fame in the early 1930s as a parachutist and later lost his left arm while making a film called Test Pilot - possibly the 1938 Clark Gable classic? Any clues gratefully received!

The three-quarter rear view brings out the clean lines.

An unusual type of undercarriage is fitted. The wheels roll sideways in a landing. 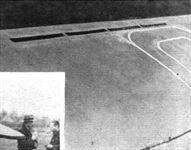 The built-in wing tip slots are one of the modern features of the Marendaz Trainer.

The spartan simplicity of the instrument panels has an appeal which is likely to be but temporary.
<<   0/0   >>