The New German "Tailless"
By EDWIN P. A. HEINZE

ON the instigation of Dr. Hermann Kohl, the successful German ocean flier, Herr Lippisch, the chief engineer of the Khoen-Rossitten Association, and his staff have developed a tailless ДальшеMore>>> plane, which has so far shown excellent flying qualities. It was recently demonstrated at Berlin-Tempelhof airport before a party of prominent people interested in aviation and representatives of the Press. Dr. Hermann Kohl, as he said in a speech, sees in the development of this type of aeroplane the present most promising step towards achieving more economical machines capable of profitable long-distance transport work across oceans and continents. He is personally interested in the early perfection of such planes, with which, as we know from other sources, he plans inaugurating a regular transport service between Europe and America.
From the performance of the first trial machine it would appear that the new type promises well for the future. It was first built as a sailplane, which was successfully flown at the Rhon, and the experience there gained was such as to encourage altering the design into the present motor-driven plane. In the sailplane the body was situated below the wing. It has now been built into the latter, with its top protruding above it, while the lower wing surface is flush. The wing is of the cantilever type, with a pronounced lateral dihedral angle. It has been constructed entirely of wood, with plywood leading edge and fabric covering. For this size of plane the wing has an unusually deep section, and its plan contours are those of an equilateral triangle, with a very obtuse apex angle forming the front, while the long base line constitutes' the trailing edge. The fuselage projects out in front, and contains two seats arranged one behind the other, the front one being equipped with the usual type of controls.
From the rear seat one has practically no view of the ground, as one is situated in the centre of the wing. An old Bristol "Cherub" engine of 30 h.p. maximum output, presented by Herr Croneiss, the managing director of the Deutsche Verkehrsflug Company (which is the second largest German air transport company), is fitted at the rear end of the fuselage, and drives a metal two-bladed pusher airscrew. The cockpits are covered by hinged hoods with wooden frames and cellon panes, some of which, at the side, are slideable.
The trailing edge of the wing on each side is formed by two ailerons, the inner set serving as elevators. The rudder fins are located on top of the wing tips, and have no lateral supporting struts, which are entirely avoided in the whole machine, giving it a very neat appearance and ensuring good aerodynamical qualities. While the fins and the attached rudders have a flat surface facing outwards, the inward surface facing towards the fuselage has a pronounced camber. The two rudders work independently, as their manner of operation is different from that of rudders on normal machines. The left rudder is solely connected with the left and the other with the right pedal, and when the machine is required to make, say, a left-hand turn, only the left pedal is moved, while the right remains stationary, and vice versa. By depressing the pedal the corresponding rudder is swung out and the air resistance thus caused retards the motion of the wing tip, while the other wing tip swings round unobstructed, so the machine makes the required turn. If both rudders were to be depressed together, it would merely reduce the machine's speed without causing it to turn.
The undercarriage consists of three independently-sprung wheels with low-pressure tyres. The two wheels under the wing, one each side of the fuselage, are enclosed in a streamlined casing secured to the wing, inside which rubber-cord-type shock absorbers are located. These are visible through cellon panes let into the top of the wing for inspection purposes. Similar inspection windows are provided at all points where the control cables used run over pulleys. The small front wheel is likewise encased, the casing forming a continuation of a perpendicular fin depending from the front end of the fuselage. The wheel casing, with the wheel, can be steered by means of a tiller in the cockpit, which, however, is only used for manoeuvring on the ground.
The span of the wing is 13 metres (42.65 ft.), and its lifting surface has an area of 25 square metres (269.1 sq. ft.). Fully equipped, but otherwise empty, the machine weighs 320 kilograms (704 lb.), and is capable of transporting a load of 200 kilograms (440 lb.). making a gross flying weight of 520 kilograms (1,144 lb.). The wing loading thus amounts to only 4.25 lb./sq. ft., and the power loading is as high as 39.4 lb./h.p. The maximum speed of the machine is said to be 155 kilometres per hour (96.4 m.p.h.), and its cruising speed 140 k.p.h. (87 m.p.h.). The highest altitude so far reached is stated to be 4,700 metres (15,400 ft.).
In the hands of the pilot Groenhoff, the machine showed a surprising degree of manoeuvrability. Groenhoff said the plane steers very lightly, and he can do anything with it which he can do with any good normal machine, including looping. The latter were, however, not shown at the demonstration. The machine flew very close circles and zoomed up in a manner that would appear to indicate its having plenty of reserve power. It seemed practically non-stallable.

Another view of the tail-less machine before the engine has been put in. This machine was only built after exhaustive tests with models, and has an estimated top speed of 110 m.p.h. The wing-tip fins and rudders are of a thick aerofoil section and also act as skids. The pilot's view seems to be negligible.

The tailless machine of the R.R.G. being tried out as a glider.
Delta IM

A BIRD'S EYE VIEW: The trailing edge flaps are divided into elevators and ailerons.
The Lippisch Delta I of 1930 was so called because of its swept-back leading edge and straight trailing edge. 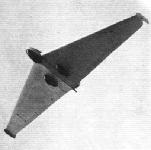