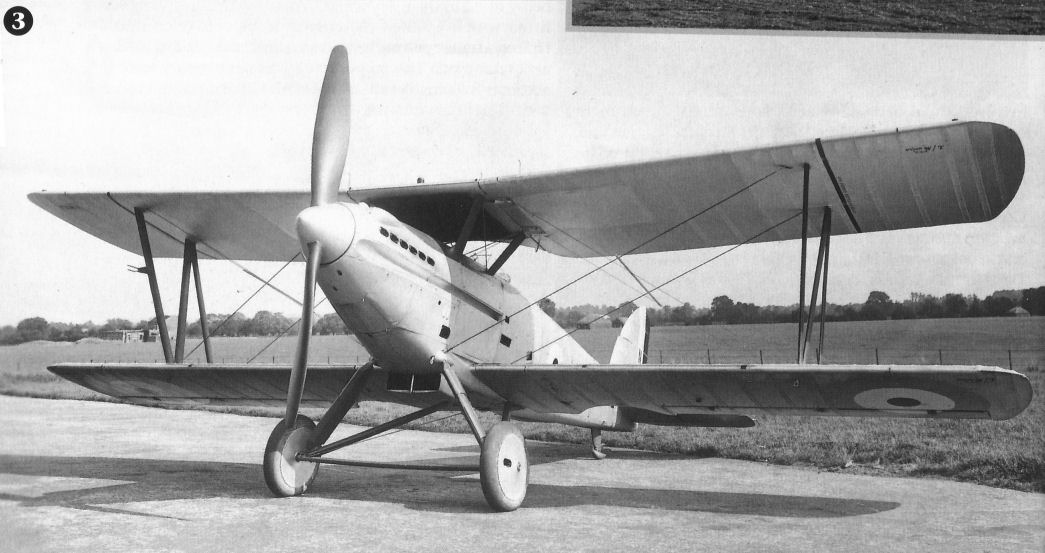 THE Parnall "Pipit" is a single-seater ship's fighter, fitted with a Rolls Royce "F" type engine. The lines are particularly clean, all extraneous resistances being reduced to a minimum. It is an "all-metal" type, stainless steel and duralumin forming the chief structural materials. Land and seaplane undercarriages are quickly interchangeable, as they are self-contained units, attached to the fuselage at common fixing points.
Accessibility is one of the features of the design. All cowling and fuselage fairing from the nose to the tail is quickly detachable.
The armament consists of two synchronised Vickers guns, laid on either side of the pilot at seat level, with the barrels protruding into troughs in the fuselage sides. Provision is also made for carrying bombs under the bottom wings.
A short-wave wireless set, working on a fixed aerial, is located immediately behind the pilot, and the oxygen apparatus, Very pistol, together with other service equipment, is conveniently disposed around the cockpit.
The cockpit is particularly free from draughts at all speeds, and sufficient heat is supplied by the retractable radiator to obviate the necessity for electrically heated clothing up to 20,000 ft. under winter conditions; whilst a controllable vent regulates the temperature for hot weather.
The disposition of the wings and fuselage shape forward combined with an adjustable seat, afford the pilot excellent vision for fighting purposes or landing.
Details of the performance with Rolls Royce F.XII.S engine may not be published. The machine, however, has a very good performance with the Rolls Royce F.XI unsupercharged engine, and the slow alighting speed of 55 m.p.h., coupled with servo-actuated brakes independently operated on either wheel, greatly facilitates the operation of deck landing.
Wings. - Equal wing span, single bay, staggered biplane.
The wings are detachable in two boxed units with jury struts fitted without slacking flying wires. The duralumin spars consist of three drawn sections riveted together and carry pressed duralumin ribs. Gap struts and drag struts are of stainless steel. The top centre-section, which carries an auxiliary skin type radiator, is attached to the fuselage by four steel struts and bracing wires. Ailerons are fitted to all four wings.
Fuselage. - Rectangular structure of square duralumin struts and stainless steel tubes faired to an oval section. The aluminium engine cowl and fabric-covered fuselage panels are all quickly removable.
Tail Unit. - Monoplane type with balanced rudder, and elevators fabric covered. Tail plane adjustable.
Undercarriage. - Cross axle Vee-type. The front legs incorporate double-acting oleo shock absorbers. Palmer type wheel brakes are fitted and servo actuated from the rudder bar. Interchangeable seaplane chassis with twin single-step long type duralumin floats can be fitted alternatively.
Power Plant. - One 495 h.p. Rolls Royce F.XI, water-cooled engine on riveted stainless steel mounting. Under-slung retractable fuselage radiator in series with wing radiator. Two main fuel tanks in top wings, capacity 68 gallons. Auxiliary tank 18 gallons. Gravity feed.
Accommodation. - Pilot behind cut-out trailing edge of centre section. Seat and rudder bar adjustable.
When fitted with Rolls-Royce F.XI unsupercharged engine, the "Pipit" has the following weights: Empty, 3,050 lbs.; total weight, 3,980 lbs.; wing loading, 11 lbs./sq. ft.; power loading, 8 lbs./h.p.
With the same engine the following performance is quoted:
Performance. - Speed at ground level, 168 m.p.h.; at 3,000 ft., 173 m.p.h.; at 10,000 ft., 168 m.p.h.; landing speed, 55 m.p.h.; rate of climb at 3,000 ft., 1,600 ft./min. Climb to 10,000 ft. 7 1/2 mins.
Areas: - Total wings, 361 sq. ft.; Total ailerons, 46-1 sq. ft.; tail plane, 25-6 sq. ft.; elevator, 19-64 sq. ft.; fin, 4-87 sq. ft.; rudder, 13-55 sq. ft.

THE PARNALL "PIPIT": A dihedral on the top plane only is one of its characteristic features.

THE PARNALL "PIPIT": In this three-quarter rear view the fuselage covering is shown in place.

THE PARNALL "PIPIT": With Fuselage Side Panels removed.

Inspection is facilitated by quickly-detachable panels. The photograph shows the wireless compartment.

ONE OF THE ALL-METAL WINGS OF THE "PIPIT": The petrol tank is housed in the inner bay, and the photograph shows how the drag bracing, in the form of tubes, is carried around this bay.

THE CONTROL UNIT ON THE "PIPIT": Three-point suspension is adopted, and the pilot's seat can be raised and lowered. It is shown in the raised position on the left. Rubber cords are used to balance the weight of the pilot. The retractable radiator is supported on a threaded column as shown, and is operated by one of the two hand wheels.