In 1948 Aerocar Inc began developing a flying automobile designed by Mr M. B. Taylor. File prototype Aerocar, with a Lycoming O-290 engine, was completed in October 1949. It was followed by a pre-production Aerocar Model I with a Lycoming O-320 engine and four additional Model I Aerocars for demonstration tours. No further production models have been built but a refined Model III Aerocar has been completed and development continues. 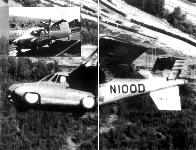 The other example of someone with a fixation on combining wheels with wings is that of Moulton Taylor, the founder of the Aerocar company in February 1948. Taylor's approach differed from that of Convair's in as much as Taylor's series of Aerocars all used the one engine for both airborne and road use. Between October 1949 and the mid to late 1950s, Taylor flew and demonstrated his Aerocars I, II and III, all two seaters with installed power rising from 100hp to 135hp and ultimately 160hp. In performance terms the Aerocar III cruised at 125mph aloft and 70mph on the road, while the time taken to convert from road to air, or vice versa was quoted as being 10 minutes. Besides the obvious problem that the price of such hybrid vehicles is likely to prove higher than buying both a car and a light plane, the case against the aerocar concept is best illustrated by the view of the Aerocar III during road transit (inset). To the writer's eye, this has all the makings of the Mother of all traffic jams ...