<...>
On the same stand as the Praga E.210 is a little low-power monoplane, the Bibi-Be 550, with side-by-side seating for pilot and passenger. Similar types did well in the Douze Heures d'Angers. The machine is the product of Benes-Mraz, of Chochen, Czechoslovakia. The designer is Mr. Benes who, it may be remembered, was co-designer with Mr. Hain in the old days when the Avia machines were produced by Milos Bondy. The Bibi-Be 550 is stated to do rather more than 100 m.p.h., and to have a range of 465 miles.
<...>

GENUINE and saleable low-powered aeroplanes have been out and about for the last thirteen years or more, so it is not surprising that we should now have reached the stage when a maximum speed of 120 m.p.h. should be obtainable with side-by-side cabin seating on little more than 60 h.p. The old original Moth, after all, had a maximum of 90 m.p.h. on much the same power, and this worthy machine, though a tandem-seater, was a somewhat adequately bestrutted and braced biplane. Curiously enough, the price in England of the Benes Mraz Bibi 550 monoplane is almost exactly the same as that of the original Moth. So, in spite of the moanings of the pessimists, "popular aviation" has advanced a little way. The landing speed figures of these time-dimension-distant machines are practically the same, so the additional performance in the case of the Bibi has not been obtained by the simple expedient of moving the entire speed-range up through a couple of A.S.I. markings.
This erstwhile Czech machine (the new international situation is not, apparently, likely to interfere with normal deliveries from Prague) is being sold over here by Aircraft and Allied Enterprises. They propose, if they can get their new aerodrome and club plans past the C.A.G. Commissioners and the Council of Associated Light Aeroplane clubs, to use the machine for ab initio training. Whether or not it is suitable for such specialised and strenuous work remains to be seen, but as a private owner’s or amateur's aeroplane it has a number of really good points.

Easy Ingress
Apart from the performance - and the machine genuinely cruises at 105 m.p.h. or more at rather less than the normal revolutions - the side-by-side seater cabin is amply roomy for two large people, and can be entered with, for the type of machine, outstanding ease, through a door on either side; there is plenty of room on a full-width tray behind the seats for luggage of any normal dimensions. The Bibi’s characteristics in the air are very good indeed, with light, well-proportioned and really effective controls, and the cruising consumption of fuel should be rather less than three gallons an hour. Furthermore, the machine is sold with very reasonably full equipment. This equipment includes wheel brakes, a vertical-reading compass, and a built-in fire extinguisher.
For the available power, the take-off, even with two people and luggage aboard, is very good indeed, though the machine which I flew had an airscrew which was, if anything, on the coarse side. The initial climb is in the region of 600 ft./min., or a little less. In smooth air it is almost entirely stable and can be flown for quite extended periods hands and feet off. As usual, none but short course-correction turns can be made on the rudder alone, but the machine can be flown indefinitely on the ailerons. Although split flaps are fitted, these are not of very adequate area and the approach is still somewhat flat and, consequently, a little difficult to judge. Minor height adjustments can be made by means of crab sideslip, though in anything resembling a steep slip the speed cannot be kept down to a reasonable figure by means of top rudder.
The flaps are directly operated from a three-position lever on the pilot’s left, and the "half" and "full" flap positions can safely be used to stretch the glide or otherwise, since, when the flaps are raised to the "half" position, there is no marked decrease in lift. The effect of lowering the flaps is to make the machine slightly tail heavy and it is necessary to use a touch of trimming control movement. This trimming lever is conveniently placed and the range of the tab movement is covered in a short and more or less identical angular displacement of the control. In the ordinary way this hardly requires to be touched except when settling down to cruising attitude.
For instructional work one would say that both the elevator and the rudder controls are over-light and sensitive at low speeds, and that it is too easy to over-correct during the last phase of the approach. The necessity for accurate fore-and-aft control while holding off, is, however, compensated for by the fact that more or less any kind of landing at any speed below 50 m.p.h. is safe and final, provided that the control is not pulled sharply back. If it is held more or less neutral when making a level "wheeler," the machine will stay comfortably on the ground. At the full control position there is just enough elevator and not too much for a good three-pointer - which is as it should be.
Knowing nothing of its test history, I did not attempt any stalling experiments to the extent of precipitating a possible spin. A gentle stall, however, is harmless enough and aileron control remains to the last. Only when the nose is pulled up quickly does a wing drop, and then the machine certainly feels as though it might start a quick spin if permitted to do so. Given normal handling there is little wrong with the characteristics at the stall, though this arrives somewhat sooner (at 45-50 m.p.h.) and more noticeably with the flaps up.
The performance has, to some extent, been obtained at the price of poor forward visibility. Even when flying level the nose is only a little way below the horizon and the screen is so flatly curved that some distortion is inevitable. On the ground it is not possible to see anything ahead without gymnastics or the help of an intelligent and wide-awake passenger. This is a fault which may be serious where instruction is concerned.

On the Ground
Another trouble is that the tail appears to be over-light on the ground, so that the brakes cannot be used for stopping purposes unless there is luggage in the locker - and must be used with care when manoeuvring. While taxying down-wind in anything more than a light breeze, the elevator control has to be held neutral or, alternatively, moved in conjunction with the throttle-back when motoring and forward when throttled back. Except for the fact that the simple ratchet pull-on brake lever would not stay in the “on” position, I had no trouble on the ground, and it is possible that the danger of nosing over has been exaggerated. Later models will be heavier in the tail and this should remove the necessity for care.
Figures for the Bibi 550 are: Span, 37ft. 8in.; length, 23ft. 7m.; weight empty, 753 lb.; all-up weight, 1,234 lb.; maximum speed, 120 m.p.h.; cruising speed, 105 m.p.h.; landing speed (flaps down), 36 m.p.h.; climb to 3,000ft., 6 min. 50 secs.; service ceiling, 13,000ft.; cruising range 480 miles; price (in London), £750. Concessionaires: Aircraft and Allied Enterprises, Ltd., 87, Regent Street, London, W.1.

Cleanly conventional in the modern manner, the Bibi has no unnecessary protuberances - hence the performance.

On the Czech stand the tail of the Letov general-purpose machine is in the foreground. Beyond it is the twin-pusher Praga E.210, and finally the Benes Bibi-Be 550 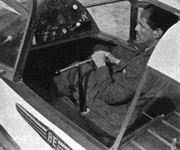 Inside the two-seater cabin. Notice the door entry width and height, and the quaint but practical control column arrangement. The throttles work downwards to open and a built-in fire extinguisher (right) is fitted as standard.

Dual control is provided in the cabin of the little Benes Bibi-Be 550. There is side-by-side seating and a roomy luggage locker.