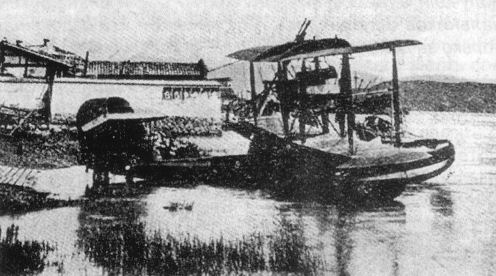 <...>
Type "Beeng." - This was a tractor biplane flying boat designed for bombing and fighting, but, if desired, with slight modifications it could be adapted to passenger ДальшеMore>>> carrying. As a bomber and fighter it carried a crew of three, a pilot and two gunners. The pilot's cockpit was situated in the hull of the boat, a little to the front of the leading edge of the lower wing, where the pilot had an unobstructed view forward, sideways and downward. The first gunner's cockpit was at the extreme bow of the boat, while that of the second gunner was behind the main wings. Both gunners were provided with machine-guns mounted on Scarff rings by means of which the guns could be swung in any direction desired. With the guns thus located, the field of firing was covered in nearly all directions. The only blind spot was a small angle allowance for the tail, which was unavoidable. As fuel was contained in tanks in the upper wing, the hull space between the pilot and aft gun cockpits was free for the stowage of bombs and machine-gun ammunition. When used for passenger carrying, four seats could be quickly installed in this space. For the comfort of passengers the sides of the hull were fitted with portholes, similar to those fitted on yachts.
The power of this flying boat was supplied by a 12-cylinder V-type water-cooled Rolls-Royce engine which developed 360 h.p. at 1,800 r.p.m. It was geared and the speed of the propeller was reduced to 1,080 r.p.m. The total weight of the plane was 6,600 lb. Overall dimensions were: Span, 56 ft.; length, 39 ft.; and height, 16 ft. 7 in. The hull, which was of the flexible or Linton Hope type of construction, was 36 ft. in length.
<...>