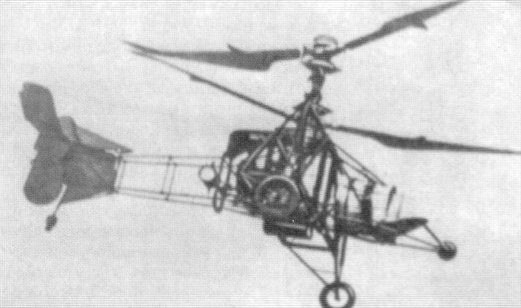 M . LOUIS BREGUET, the well-known French aeroplane constructor, has recently been making trials of a new machine ДальшеMore>>> which he has been developing, and which he terms a gyroplane. In this design the engine drives two rotors, mounted on a pylon one above the other and turning in opposite directions.
Recently, M. Breguet pointed out that the speed of commercial aeroplanes is limited at present by the necessity of low landing speeds, and that for this reason they cannot be loaded at more than 150 kg./sq. metre (approximately 31 lb./sq. ft.) of wing surface at the maximum, notwithstanding that they may be equipped with the best-known aeronautical devices to aid their lifting power.
In order to obtain increased speeds, together with suitable landing qualities, for commercial machines, M. Breguet calls attention to the formula represented by the gyroplane, which he believes can furnish an interesting solution to these questions. He points out that the gyroplane gives promise of not only attaining considerably higher speeds, but also of sustaining a much greater load per unit of lifting surface, which would furnish a substantial economy in the commercial operation. Furthermore, owing to the fact that the forward speed of the gyroplane is relatively independent of the rate at which the blades revolve, the machine can take off and land vertically.
The machine, as can be seen from the illustration, is an improved helicopter, in which the rotating blades, instead of the traditional airscrew, furnish the forward propulsion. As these blades are mounted on universal joints, they can also be used to ensure the directional and lateral control. The air pressures acting on them depend at each instant on the relative speed of the blades and on the incidence at which the latter are adjusted. These elements vary during each revolution of the blades, the speed of rotation being added at each half turn to the forward speed at which the gyroplane is moving. Unless precautions were taken, this fact would cause loss of stability. M. Breguet has overcome the difficulty by attaching the rotor blades to their central hubs by means of universal joints mounted on two orthogonal (right-angled) axes. Each blade is therefore free to adjust itself during each revolution according to the direction of the resultant forces acting on it, and can rise and fall independently, with an out-of-phase movement corresponding to the angle at which it is mounted. When the blades advance against the relative wind pressure created by the forward movement of the machine they are raised, and a contrary movement takes place during the succeeding half-turn when the blades recede before the same wind pressure.
M. Breguet has evolved the following formula for the lift of rotating blades of this description:-
q=P^1.5/WD,
where P is the weight lifted,
W is the power consumed,
D is the diameter of the rotor.
Taking into account the "solidity" of the rotor, i.e., the ratio of the actual supporting surface to the surface of the circle swept by the blades, the maximum theoretical value of q, when stationary and at ground level, is expressed, in metric units, by the very simple formula q = 0.628 pv, where pv is the efficiency of the rotor considered as a ventilating helicoidal fan.
Thus, for example, if the efficiency attains the value pv = 0.7, this maximum is 0,428.

There is no doubt, in this photograph, about the Breguet gyroplane being completely air-borne and as they used to say in the old days, "in full flight." A speed of 62 m.p.h. has been attained. 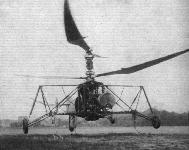 Fhe Breguet gyroplane under test. Its wheels are clear of the ground but it is being held down by picket ropes

A close-up view of the rotor head of the Breguet Gyroplane. The blades are carried on universal joints, and an incidence linkage is visible on the left.

This photograph shows the internal construction of one of the rotor blades.