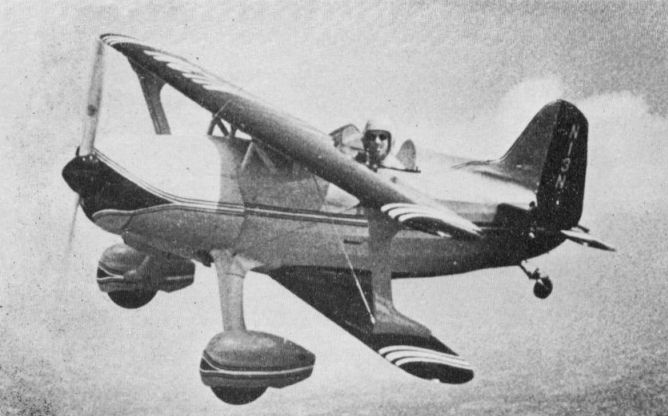 This Knight Twister is the machine that appeared without an engine in our Feb. '54 issue. Registration is CF-GRK. Comparing it with the other Twister illustrated on p. 313, Oct. '54, readers will notice that the different engine has changed the outline very considerably.

Always a delight is the sporty little "Knight Twister", in this case the Anderson and Babcock version, sometimes referred to as the Sundelin " Knight Twister". This one is perhaps the best known of its type and its construction and finish is superior to most. The long nose holds only an 85-h.p. Continental engine, set far out to balance the structure. The streamlined "I" struts shown in the photograph have been replaced with "N" struts.

ANOTHER KNIGHT TWISTER (NX5726N) in superb condition, built by Ed. Effenheim of Milwaukee. Shown here with rare 67-h.p. Tank in-line, the Twister has since been re-engined with an 85-h.p. Continental flat-four and is resident in Texas.