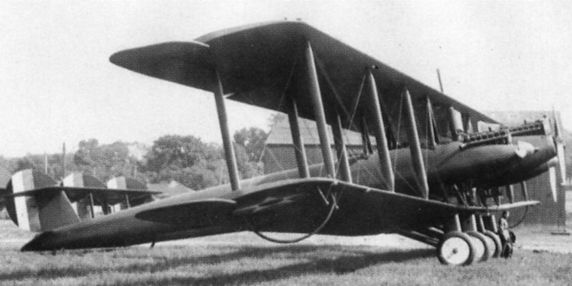 L.W.F. Engineering Co. - The "Owl," known in the industry as the model " H," is a large land biplane of 1,200 h.p. It is of the twin fuselage and centre nacelle type, and so designed that, by installing one of three different nacelles and a few minor changes, it may be used for transporting mail or express passenger carrying or night bombing.
The outstanding features that identify this machine among others are the monocoque fuselage and nacelle, the intercommunicating petrol system and the fire-extinguishing system. The wing construction is of the Pratt truss type, and consists of three upper and three lower panels of 11 ft. chord and equal spans with an 11 ft. gap. Each wing is equipped with balanced interchangeable ailerons. Ribs are built up first and then slipped over the beams which are built up of four pieces, thus forming a hollow box section; the top and bottom are of spruce and the sides of birch. The internal wire bracing is double and of No. 8 solid piano wire and 3/16-in. hard cable. All external wire fittings are applied directly to the beams and project through the covering.
The fuselages and nacelles are supported between the upper and lower planes on tubular struts which are thoroughly streamlined. A 12-cylindered high-compresssion Liberty engine is streamlined into the nose of each fuselage and the nacelle, each engine driving a tractor propeller. The main load and crew are carried in the nacelle, while each fuselage has a small auxiliary compartment for excess mail or cargo.
The tail is of the biplane type, attached to the rear end of the two fuselages. It consists of two double cambered horizontal stabiliser planes superimposed, with elevators attached and a fin on the top of each fuselage followed by a balanced rudder. A third balanced rudder is installed midway between the two.
The landing gear is of the six wheel, two axle type with the outer two wheels side by side directly under the centre of each fuselage and the other two wheels spaced equally between.

THE L.W.F. "Owl" was designed and built by the L.W.F. Engineering Co. of Long Island, N.Y., to meet the demand for a large freight and mail carrying aeroplane, and during its trials last year gave very encouraging results. It is of the twin fuselage-central-nacelle type, and by installing one of three different nacelles the machine may be converted for mail or freight, passenger, or night bombing work.
In the nose of each fuselage and the nacelle is a 400 h.p. high-compression Liberty engine, driving a 9 ft. 6 in. diameter tractor airscrew. Each power plant is complete within its respective fuselage or nacelle, and a radiator, with individual shutter control, is mounted above each engine, in the slipstream of the airscrew. As with previous L.W.F. machines, an important feature of the "Owl" consists of the monocoque construction of the fuselages and nacelle - a special form of laminated wood construction evolved by this firm. The fuselages and the nacelle - which are about 50 ft. and 27 ft. in length respectively - are well streamlined, and the main load, pilot and crew are carried in the central nacelle, only small auxiliary compartments, for excess mail or cargo, being provided in the fuselages.
The wing construction is of the Pratt truss type, consisting of three upper and three lower panels of 11 ft. chord; upper and lower panels are of equal span, and the gap is 11 ft. The central panels, which are of about 20 ft, span, carry the fuselages, nacelle and under-carriage, the fuselages and nacelle being supported midway between the planes by stout V-struts. The ribs are built up first and then slipped over the spars, which are of the hollow box type, built up of four pieces - spruce for the top and bottom, and birch for the sides. Internal bracing is by double No. 8 solid piano wire and 3/16-in. hard cable. All external wire fittings are applied directly to the spars, and project through the covering. The upper plane, which is straight, is set at an angle of incidence of 4 1/2, whilst the lower plane, the outer extensions of which have a dihedral angle, have 3 1/2 angle of incidence. U.S.A. No. 6 wing section is employed. Upper and lower planes have balanced interchangeable ailerons.
The tail is of the biplane type, attached to the rear ends of the two fuselages, and consists of two double cambered horizontal stabilisers, superimposed, with elevators hinged to the trailing edges, and a fin and balanced rudder mounted on the top of each fuselage. A third balanced rudder is mounted midway between the other two.
A six-wheeled two-axle landing gear is fitted, the outer wheels being arranged, in pairs immediately under the fuselages, the inner wheels being located beneath the central nacelle. All are placed sufficiently forward of the centre of gravity to prevent the machine from turning over on its "noses."
The principal characteristics of the "Owl" are as follows :-
Span 105 ft.
Chord 11 ft.
Gap 11 ft.
Overall length 53 ft. 9 1/2 ins.
Overall height 17 ft. 6 ins.
Area of main planes (with ailerons) 2,200 sq. ft.
Area of ailerons (4) 200 sq. ft.
Area of tail planes (with elevators) 174 sq. ft.
Area of fins 28 sq. ft.
Area of rudders 78-9 sq. ft.
Weight empty 12,600 lbs.
Useful load 7,600 lbs.
Loading per h.p. 16-6 lbs.
Loading per sq. ft. 9-1 lbs.
Speed range 55-110 m.p.h.
Climb to 10,000 ft. 30 mins.
Ceiling 17,500 ft.
Range 1,100 miles.