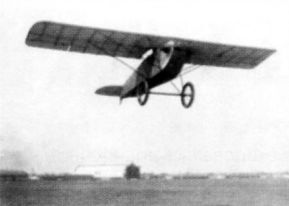 The Stahlwerk Mark, Abt. Breslau, were to have exhibited two types, the R.III and the R.IV, but up to the time of our leaving Gothenburg only the smaller machine the R.III, had turned up. The letter R, it might be mentioned, stands for Rieseler, the designer of the machines. On the first day of the exhibition no less than three R.III's were to be seen on the stand, but later one of these disappeared, leaving two on the Stahlwerk stand, one in flying trim and the other with its wings folded. On p. 497 is published a photograph of an R.III which landed recently in front of the Opera House, Unter den Linden, Berlin.
The Mark sporting single-seater R.III is of the parasol monoplane type, and of composite construction. The fuselage is built entirely of steel tubes, welded together as in the Fokkers, and braced by piano wire. The wing, on the other hand, has wooden spars and ribs of usual form, and is, like the fuselage, covered with fabric. The front portion of the body is, however, covered with aluminium.
The monoplane wing is built in two sections, to facilitate dismantling and transport. The wing ends attach to a cabane formed by inverted Vee steel tube struts, quick-release fittings being used. On each side are a pair of streamline steel tube lift struts, which complete the wing structure. The strut attachments are also of the quick-release type, and the wings can be taken off and strapped in place on the sides of the fuselage for transport in a few minutes.
The manner of carrying the wings when folded is unusual. Each of the two cylinders of the 30 h.p. Haacke engine is provided with a piece of flat strip steel shaped to engage, by means of a bolt, with the fitting on the inner end of the rear spar. The outer ends of the wings, which point aft when folded, are supported by a strap of webbing passed around the rear portion of the fuselage.
The two-cylinder Haacke engine is so mounted that it can be removed from the machine in about 15 minutes. The petrol tank was originally placed under the wing, so as to obtain the advantage of gravity feed, but as this rather interfered with the ease of erecting and dismantling the tank is now placed in the fuselage. If desired tanks giving 10 hours' duration can be fitted.
It is of interest to note that we have been informed, by an English pilot who has been permitted to fly one of these machines, and who has no interest in or connection with the makers, but who judges the machine simply as one of the many aeroplanes which he has flown, that the R.III handles remarkably well in the air, is easy to fly, quick on the controls, and yet not at all "tricky." In Germany, we believe, these machines have established quite a reputation, and already a considerable number have been built, the type R.III having been put into quantity production.
Following are the main characteristics of the Stahlwerk Rieseler R.III: Engine, 30 h.p. two-cylinder, opposed aircooled Haacke; length, o.a., 5 m. (16 ft. 5 ins.); span, 7.3 m. (24 ft.); wing area, 10 sq. m. (107.6 sq. ft.); weight empty, 200 kgs. (440 lbs.). In addition to the pilot and 55 lbs. of fuel, the machine will carry a useful load of about 50 kgs. (110 lbs.). The maximum speed is about 100 kms. (62 m.p.h.), and the landing speed is stated to be 40 kms. (25 m.p.h.). As the wing loading is just over 7 lbs./sq. ft. the figure for landing speed seems optimistic. When folded the machine can be, and in fact has been, transported along a road towed behind a motor-cycle, with the tail skid resting on the carrier.

Front and side views of the Stahlwerk R.III sport monoplane, fitted with a two-cylinder 30-40 h.p. engine.

A Stahlwerk Mark R.III lands in Unter den Linden: On July 7 this machine was successfully landed in front of the Opera House in Berlin.

The Stahlwerk R.IV monoplane - a larger edition of the R.III, fitted with a 55 h.p. engine.

How the planes are carried when folded on the Stahlwerk Rieseler type R.III. It scarcely seems fair to the engine to sling the weight of a wing from the outer end of a cylinder.
<<   0/0   >>