The Short "Swallow" all-metal biplane, is the outcome of this firm's wide experience in the construction of rigid airships, which has convinced them that this form of construction - employing light aluminium alloys - presents great possibilities in the design and construction of heavier than air craft.
The construction generally lends itself to rapid production. Practically speaking, all the parts which comprise the making of a complete machine can be stamped out of sheet material. The machine shown is completely built with duralumin, with the exception of the wing spars, which are of steel tubing, and a few other minor parts in which it is found that steel is a more suitable material. The fuselage is a metal shell, similar in construction to the wooden monocoque type, and is virtually a streamline duralumin tube suitably stiffened with bulkheads, rings and longitudinals. Where holes are cut in this shell the edge is suitably stiffened by a roll of sheet duralumin. This structure has been thoroughly tested, and has proved of sufficient strength to withstand the necessary tail loads. The planes are built up with steel tubes for spars with lightened sheet duralumin ribs, the covering being sheet aluminum stiffened by small fluting at certain intervals. Ordinary cable wing bracing is used in conjunction with streamline steel struts. The lower section spars pass through bulkheads in 'the fuselage, which spread the load evenly over the fuselage shell. The undercarriage is of the ordinary vee type, sprung with elastic, and fitted with "Oleo" shock absorbers. The struts are streamline steel tube. The construction of the propeller is entirely novel, the body being an aluminium casting faced with duralumin. The engine, a 260 h.p. Siddeley Puma, is mounted on steel tubes held in position by built up duralumin bearers. No wood or fabric has been used, and great care has been taken to avoid all possible risk of fire, a fireproof bulkhead being fitted aft the engine. The machine is a single-seater single-engined tractor biplane, with “two-bay" wings, having been designed to carry mails or light freight to the amount of 400 lbs. If desired, this space could be designed to take two passengers in place of mails. 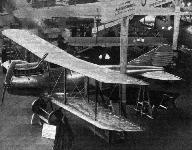 A METAL-CLAD PIONEER: This Flight photograph shows the Short "Silver Streak" which was exhibited at the Olympia Show of 1920. The machine had metal monocoque fuselage and metal-covered wings. 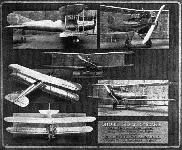 PURCHASED BY THE AIR MINISTRY: The Short "Silver Streak" all-metal biplane, which was exhibited at the last Olympia Aero Show, was delivered to one of our flying stations recently, as announced last week. 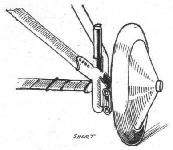