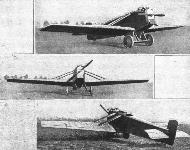 FROM THE FIRST PRAGUE AVIATION MEETING: The first Czecho-Slovakian air competition was held from September 11 to 18, and is reported to have been a great success. Our photo shows the Avia monoplane, which, piloted by B.Munzar, covered the distance about 850 kilometres in 9 hrs. 37 mins. 53 secs. It is fitted with a 50 h.p. Gnome.

THE SECOND CZECH INTERNATIONAL AERO EXHIBITION AT PRAGUE: The "Avia" exhibits, that in the foreground being the B.H.3, a chaser monoplane fitted with a B.M.W. 185 h.p. engine; in the centre is a smaller edition for a 20 h.p. engine; the third machine is a sporting 2-seater with a 48 h.p. Gnome.