AMONG the new types of machines in course of construction or contemplated when the War finished were several of more than passing interest. Of these some never came into being, others were produced in twos ДальшеMore>>> or threes where scores had been planned, according to the stage of completion at the signing of peace. Some of these machines have already been described in this journal, others are still being experimented with by the Air Ministry, and publication of particulars is not permitted.
Among the machines which, although designed for War purposes, could easily have been converted into very useful commercial machines, especial interest attaches to the "London" triplane, designed and built by the Nieuport and General Aircraft Co., Ltd., of Cricklewood, on account of several unusual features which would appear to have a very special bearing upon the construction of commercial aircraft. We understand that two of these machines are now being tested by the Air Ministry staffs at two different air stations, but although permission has been granted to publish a description, no particulars regarding results of test are yet available. Before being handed over to the Air Ministry for exhaustive tests, the machines were, however, tested by the firm's test pilot, Lieut. Tait-Cox, who found that they handled very nicely in the air, it being possible to fly them "hands off," and also to fly level with only one engine running.
Designed by Mr. H. P. Folland, chief engineer and designer of the Nieuport and General Aircraft Co., as a short-distance night bomber, the "London," as the machine is called, has not a very long range, about 200 miles, but carries a very useful load of bombs over that distance, i.e., approximately 2,000 lbs. The triplane form was chosen from a number of considerations. For a given area probably the triplane form is more manoeuvrable than is a biplane of the same area, at any rate when it comes to fairly large machines. Also the question of housing is simplified by the shorter span of the triplane. Again, from the practical point of view, the shorter wings of a triplane do not call for such long lengths of timber, which are difficult to obtain.
Apart from these general considerations, the designer has given a very great deal of thought and attention to the detail construction, which is such as to lend itself to quick and cheap production by a great percentage of unskilled labour. Not only so, but only such materials as are always, easily obtainable, and at low cost, have been employed in the construction. For instance, the fuselage is really nothing more nor less than a glorified packing case. It is built almost entirely of moderate quality woods such as deal, pine, and cypress. The attachment of the various members to one another is by means of nails, brass wire sewing, wood pegs, and glue, thus eliminating the use of bolts and nuts or wood screws which are (or were when the design was got out) costly and difficult to obtain in sufficient quantities. The few metal fittings which are required for the attachment of wires, landing gear, etc., are of the simplest possible form, and are generally made from ordinary mild sheet steel without the necessity of using press tools. Mention may also be made of the fact that extensive use has been made of tubular rivets, which wherever possible take the place of bolts and nuts. Finally, the covering takes the form of tongued-and-grooved matchboarding, so that it will be seen that our reference to the "packing-case" construction is not altogether amiss. We would point out, however, that this is said in no derogatory sense, quite the reverse. To produce a first-class aeroplane out of such materials is an achievement of which the designer may well be proud, and amid the wartime spirit of "never mind the cost" it is quite refreshing to come across an instance where cost has been seriously studied. This is one of the reasons why the machine is of such extraordinary interest when viewed from a commercial point of view. As for the success of this construction, it is perhaps too early to venture an opinion until time has got in its work, but in the meantime it might be mentioned that an experimental fuselage of this construction was made, and on testing to destruction gave very good results. It was then thrown into the yard, where it was subject to wind and rain, and when last we saw it there, a couple of months ago, it did not look much the worse for its "open-air life," apart from the fractures caused by the destruction tests. There would therefore be grounds for supposing that in actual use such a fuselage might stand up to wear and tear very well, and as its weight, although naturally on the heavy side, is not such as to be prohibitive to its use on a commercial machine, it seems well to place on record some detailed reference to the principles employed in the construction, not only of the fuselage, but also of the wings, the details of which are also, in many cases, different from usual practice.

As a Commercial Machine

An examination of the accompanying illustrations will show that with very little modification the "London" could be turned into a very useful passenger or goods machine. The only alteration necessary would be a new fuselage, extending upwards as far as the middle plane. Such a body could be arranged to seat about 12 passengers, and we understand that, as a matter of fact a body of this description has actually been designed for the machine by Mr. Folland. In view of the unusual features which make for low first cost and equally low upkeep and running expenses it is very much to be regretted that such a machine was not tried on a commercial air route, since the constructional features would appear to have much to recommend them. Many of these features have been patented, such as the body construction, the chassis strut fittings, the application of tubular rivets, the fin adjustment gear, and the spinner propellers. All these patents were taken out as long ago as 1918. The practical closing down of the Nieuport firm is probably too far progressed to permit of any hope of a resurrection, but one ventures to express the hope that the services of a designer of Mr. Folland's capabilities will not be lost to aviation but that he will find the opportunity of continuing the excellent work he has commenced while with the Nieuport and General Aircraft Co.
Following are the main data of the Nieuport "London” night bomber:- Span 59' 6". Length o.a., 37' 6" Wing area 1,100 sq. ft. Chord 6' 8". Gap 5' 10". Wing section R.A.F.15. Angle of incidence 3". Dihedral angle 174". Weight empty 4,380 lbs.; weight fully loaded (with fuel for 400 miles and 2,000 lbs. of bombs) 8,650 lbs. Load/sq. ft. 7.72 lbs. Load/h.p. 13.28 lbs. Speed 95 m.p.h. at 10,000 ft. Endurance 4 hours. Climb 10,000 ft. in 20 mins. Ceiling 18,000 ft.

THE NIEUPORT "LONDON": Three-quarter front view of the fuselage

One of the win|s of the Nieuport "London"

THE NIEUPORT "LONDON": Two views of one of the undercarriages

The "inverted A" type tail skid of the Nieuport "London." 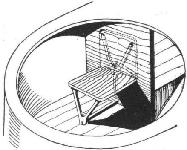 THE NIEUPORT "LONDON": Some detail sketches of the "packing-case" fuselage construction. Note the use of brass wire sewing and copper nails turned over on inside.

THE NIEUPORT "LONDON": Interplane strut fitting. Note recess in end of strut for aluminium packing pieces. On the right a chassis strut fitting

THE NIEUPORT "LONDON": Attachment of interplane strut to one of the double spars

THE NIEUPORT "LONDON": Sketches of the very substantial spar fittings 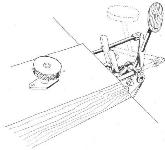 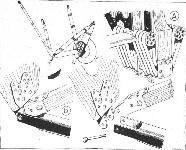 THE NIEUPORT "LONDON": Diagram of one of the undercarriages and some details. 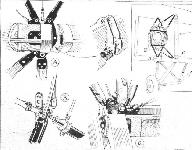 THE NIEUPORT "LONDON'': The inset in top right-hand corner shows the location of details A, B, and C.

THE NIEUPORT "LONDON": Some details of the "inverted A" type tail skid.