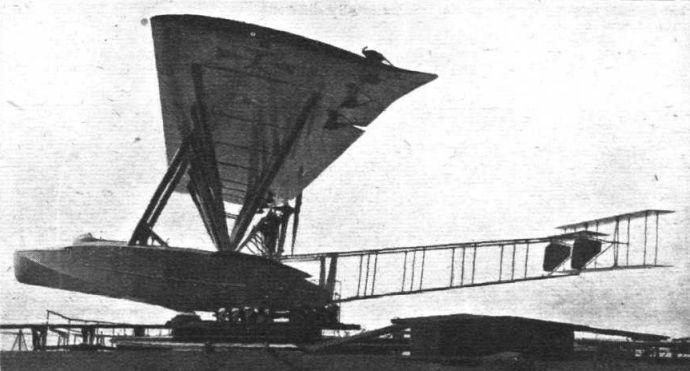 As will be seen from the accompanying photographs, the Rs.II, as the next type was called, has a short boat hull, not altogether unlike that of the Sopwith "Bat boat." The tail planes are carried on outriggers ДальшеMore>>> from the main hull, and comprise a biplane tail, with a small elevator placed between and slightly ahead of it, and of twin balanced rudders. The top main plane shows much the same arrangement as that of the previous model, but the lower plane has shrunk still further and is, in fact, reduced to two short wing stumps attached to the boat hull, from which it is braced by sloping tubes. The short span of these wing roots necessitated a slight alteration in the wing bracing, the tubular vee-struts being carried inwards to the top rails of the boat instead of forming, in front view, a Warren truss, as did those of the Do. Rs.I. The power plant consisted of four 240 h p Maybach engines, placed in the hull and driving three pusher air-screws. Whether because of transmission difficulties or on account of the extremely low e.g. in relation to the monoplane wing is impossible to say, but the fact remains that after a few experiments this arrangement was discarded in favour of direct drive, with the four engines placed on steel structures between the wing and the top of the boat. This model was we believe, known as the Do. Rs.IIa, as it was, generally speaking, similar to the Rs.II. The tail outriggers are, however, shorter and carry a monoplane tail plane, with a balanced elevator. There are also in this type two fixed vertical fins, the "above-and-below" rudders being balanced by small projections working in cut-out portions of the fins. The boat hull is, it will be seen, very wide, and appears to give very little spray, as shown in the photograph of the machine taking off. It is worthy of note that this hull has a vee-bottom in front of the step, while aft of the step the vee-bottom is broken in the centre by a box-like projection, not unlike those found on several French Nieuport seaplanes. The lower wing roots, it will be seen, are placed well aft on the hull, their trailing edge being aft of the stern, and they are given a very pronounced dihedral angle. We regret that no data are available regarding the size and weights of this machines.

The Do.Rs.II: This machine had the engines placed in the hull and transmission drive to three pusher airscrews. Note the wing roots on the boat and the strut bracing.

The Do.Rs.IIa: This machine is a development of the Rs.II, and has the engines placed above the hull, with direct drive to the airscrews.