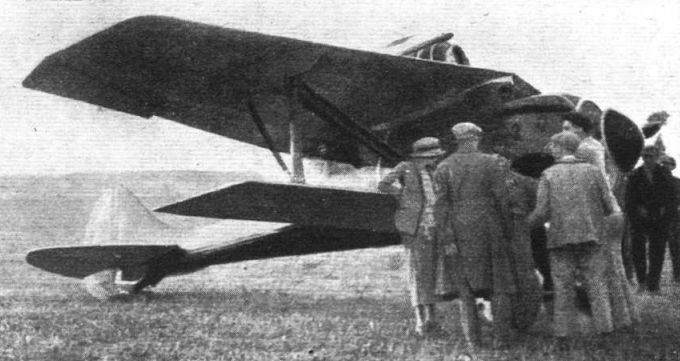 The de Monge V.a. - This machine was described in the entries list as a monoplane, but some photographs which we have seen, and one of which is published herewith, show it as a biplane. The riddle is solved, however ДальшеMore>>> by the discovery that the lower plane could be easily removed, with its Vee struts, when the machine becomes a monoplane with a single lift strut on each side. The fuselage is swept up to meet the upper plane, and it appears that the pilot sits inside this "hump." The engine of this machine is also a 300 h.p. Hispano, and the machine was expected to be very fast. Unfortunately, a collapsed wheel also resulted in damaging this machine to such an extent as to preclude flying it in the race. M. de Romanet, the pilot, was, however, at Hendon during the race, and was, we believe, quite taken with the Mars I. Following are brief data relating to the de Monge machine: Span, 26 ft.; length o.a., 23 ft.; chord at root, 8-5 ft.; chord at tips, 3-3 ft.; wing area, 160 sq. ft.; weight in flying trim, 2,000 lbs.; load per sq. ft., 12-5 lbs.; load per h.p. (on 300 h.p.), 6-6 lbs

Another "Non-Starter": The de Monge Monoplane, which in this view is a biplane. The lower wing is readily detachable, when the machine can be flown as a parasol monoplane.