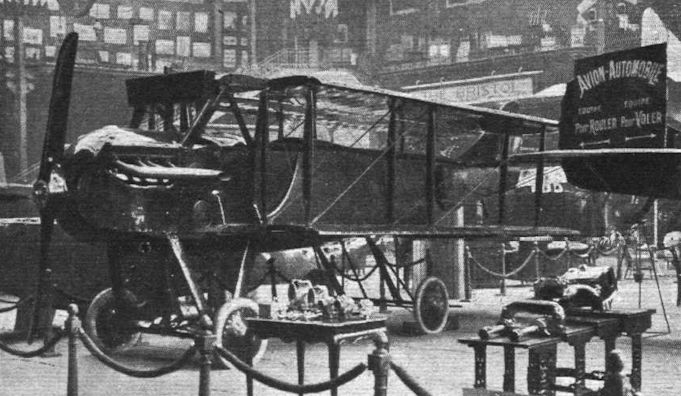 ALTHOUGH generally looked upon as more or less of a freak the machine exhibited by R. Tampier was a serious attempt at discovering how far it is possible ДальшеMore>>> to produce an aeroplane which shall be capable of proceeding along a road or street under its own power if for any reason it is desirable to do so. Although frankly an experiment, the machine shown has succeeded in doing this, and so far the experiment is, therefore, to be judged a success. That in the process the extra engine and gear have run away with most - or, at any rate, a large proportion - of the "paying load" is rather beside the point. The designer does not claim that this particular machine has any great usefulness except in proving his theories on a full - or probably it would be more precise to say on a flying - scale. The idea is, we believe, that sooner or later large passenger or goods machines will be so fitted, and that this will have several advantages. For instance, if a machine is obliged to make a forced landing in a field, it will, it is hoped, be able to fold its wings and proceed by road to the nearest aerodrome where repairs can be effected. Or again, suppose that the aerodrome for which the machine is bound is covered in fog, while a few miles away there is a good bit of landing ground which is clear and free from fog. The machine could then land in clear weather, and, folding its wings, proceed to its destination by road. There is a good deal to be said for the argument, and the idea is less fantastic than one is inclined to think at first. There is all the difference in the world between sending a repair gang out to a field to effect repairs on the spot, or else bring the machine home in bits, and being able to get the machine to its destination under its own power.
Obviously, it is not feasible to run the machine on the aero engine, as even throttled down to its minimum revs, the engine would be too rapid in acceleration and power to make driving along a road a comfortable task. An auxiliary engine has, therefore, been fitted, which, in the machines exhibited, is of 10 h.p., and, with its transmission, weighs a good deal. On the other hand, in a large machine, the makers of the R. Tampier machine point out, the auxiliary engine can be used for generating current for lighting, wireless, etc., so that its weight is not altogether a dead loss. In other words, it can more or less be made to earn its keep.
Two identical machines were shown on the Tampier stand. They are tractor biplanes with 300 h.p. Hispano-Suiza engines. The wings are arranged to fold back, and in order to occupy as little road width as possible, the trailing edges are made to hinge, so that the two planes lie practically with their rear spars touching one another.
A small 10 h.p. auxiliary engine is housed in front, below and aft of the aero engine, and a car type drive, with four speeds and a reverse, transmits the power to the two main aeroplane wheels. A second set of wheels are mounted on a collapsible structure, coming down from the after portion of the fuselage. These rear wheels are so mounted as to be steerable, and are connected up to the rudder controls. Normally, the machine, when travelling along a road, proceeds tail first, although the reverse drive enables it also to travel nose first. When not in use, the rear undercarriage folds up, and is tucked away inside the fuselage. The two machines shown travelled to the Show under their own power - that is to say, not only up to the entrance, but actually on to their stand. After the closing of the exhibition, one of the machines was driven through the crowded streets of Paris, climbed the hill at Montmartre, and, returning, travelled back down the hill again. As far as the actual machine is concerned, it has been flown without, apparently, the extra weight of gear, etc., making an appreciable difference to the performance, and it has travelled along many miles of road, being capable of a road speed of about 25 m.p.h. It certainly appears that the idea is worth developing, and it is not inconceivable that in years to come some such arrangement will be found on most commercial machines.

M. RENE TAMPIER has for several years made a special study of the avion automobile, i.e., the aeroplane capable of proceeding, with wings folded, along a road or street, the power necessary for this purpose being derived from a small auxiliary motor placed behind the main engine. It may be recollected that some years ago a Tampier avion automobile created quite a sensation in Paris by driving along the main streets and boulevards, dodging in and out in the Paris traffic. At the time most people probably thought the idea a clever one, but without practical importance. Not easily daunted, M. Tampier has persisted with his development' work, and at the present time has produced machines which are really useful aeroplanes, and which are at the same time capable of going to practically any destination under their own power. For war purposes it may be imagined that a squadron equipped with machines of this type would be a very mobile unit, as it should be able to change its position overnight or under cover of a fog. Not only so, but a machine forced by engine trouble to descend should be able to regain its base if not too far removed, and unless the descent had to be made in enemy country. There can be no doubt, however, that the weight of the automobile gear is considerable, and that the machine so equipped must necessarily lose somewhat in performance. Several types of machines are now produced by Tampier, such as the T.2, a small two-seater with Clerget engine, the T.3, a two-seater fighter with Hispano-Suiza engine, and the T.4 also with Hispano engine. A feature of the Tampier machines is necessarily that of folding wings, and a special study has been made of reducing the folded width to a minimum. We show a photograph of the T.4, which is provided with folding wings, and it will be seen that the inner struts lie quite close to the fuselage, in the position, in fact, usually occupied by jury struts in machines with folding wings. In the Tampier, however, they are part of the main wing structure.
Apart from his avions automobiles M. Tampier also exhibited two types of auxiliary engines for use as starter engines and also for generating the current for the wireless outfit. In the automobile type of machine the auxiliary engine is used for driving along the road. One of these small engines is a four-cylinder water-cooled unit, while the other is a two-cylinder engine of very neat and compact appearance.
The Tampier T.3 is provided with the four-cylinder type, placed transversely in the fuselage, immediately aft of the main engine, and is used for road transport as well as for starting and generating purposes. In the T.4 a two-cylinder unit is fitted, and is used for starting and generating only, this machine not being of the automobile type.
M. Tampier also exhibited a petrol level indicator which he has given the name "Look." This is fitted normally in place of the usual filler cap, the float mechanism not being in the way for filling when the indicator portion is swung out of the way.

The Tampier "Avion-Automobile" has a small auxiliary engine which drives it along the road at about 20 m.p.h., when the wings are folded and the rear wheels let down.

Front view of the Tampier T.4, which has folding wings. A two-cylinder starting engine is fitted.

Transmission and differential of the Tampier T.3, which can be driven along a road or street en automobile.
<<   0/0   >>