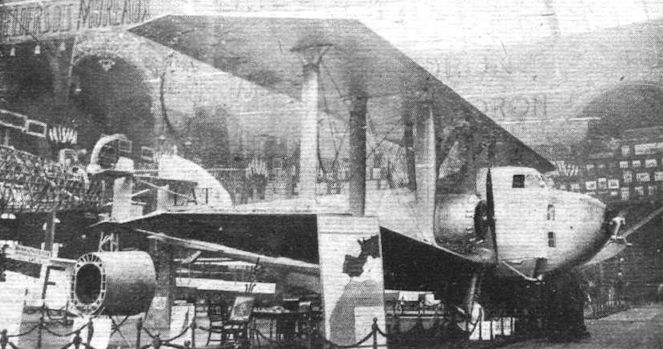 The type "Lat.4" is a very large three-engined machine, with three 300 h.p. Salmson engines, placed one in the nose of the fuselage, and the other two on the wings, or rather between the wings, as they are supported mainly from the fuselage. The machine is far from being pretty, and its bulk appears unnecessary compared with the number of passengers carried.
The fuselage is of ample dimensions, and the large cabin is divided by a partition into two more or less separate cabins. A count of the seats discloses only 16, although the passenger accommodation claimed is 20. Possibly the remaining passengers are tucked away in the pilot's cockpit, and in the anteroom, near the entrance door. The pilot's cockpit is immediately aft of the fuselage engine, and has a raised roof, somewhat like a conning tower. An opening in its roof allows the navigator to get his head outside to survey the situation.
The front engine is neatly covered in by the fuselage covering, and the two wing engines are enclosed in streamline power eggs, presumably with their tanks mounted just behind them. The method of supporting the engines is unusual, inasmuch as the main supports are in the form of struts springing from the fuselage. There is a strut running to the lower wing spars, where the crutch type of shock absorbing arrangement is installed, and the engine support structure is triangulated. If sufficiently strongly carried out, this method of supporting the engines should have the advantage of lessening the amount of vibration transmitted directly to the lower wing spars, the main attachments being on the fuselage where it is easier to take care of the heavy concentrated loads. Also the engines are easily accessible.
The main plane structure is chiefly remarkable on account of the absence of struts in way of engine cars, there being only three struts on each side. Some distance outside the engines is a pair of inter-plane struts with incidence bracing of the usual form, while further out towards the tip is a single I-strut. The ailerons are of the same type as those of the smaller machine already referred to.
One of the accompanying sketches shows the undercarriage of the Latecoere type 4. The wheels, it will be seen, are in duplicate, and are placed side by side. Owing to the fact that the shock absorbers are housed inside the lower plane, the attachment of the legs of the undercarriage Vees to the axle is by universal joints, and a short strut projecting from the fuselage serves as an anchorage.
A biplane tail is fitted on the "Lat.4." The tail planes are of the trimming type, and there are three rudders, of which the outer two appear to be so arranged as to allow of setting a course, while normally the centre one only is used for steering. The bracing of the tail is unusual, and one noticed that the lift wires run out at a very flat angle indeed. No data of weights or performance of this machine are available, but the main dimensions are as follows: Length, over all, 47 ft. 9 ins.; span, 81 ft.; height, 20 ft. 6 ins.

The three-engined Latecoere is a very large machine for the number of passengers carried.

View inside the cabin of the Latecoere three-engined machine.

SOME LATECOERE DETAILS: The four-wheeled undercarriage of the three-engined machine. The shock absorbers are inside the wings.
<<   0/0   >>