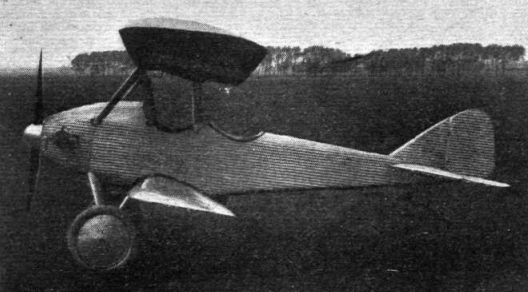 THE aeroplane shown in the accompanying illustrations is the product of a newcomer to the German aircraft industry - the Entler-Werk, Wilhelmshaven. It is designed by Herr Victor Entler, of ДальшеMore>>> Bremen, who was formerly with the Junkers, Sablatnig and Hansa-Brandenburg firms. The first series of this small biplane is in the production stage, and will be produced both as a single-seater and a two-seater.
The power plant fitted varies, according to the customer's own choice. Amongst others, Mr. Entler hopes to fit the 40 h.p. Green engine in these machines. The 'plane itself is sold in Germany for 250,000 marks and in Great Britain for L220, with two years' guarantee. With the present engine installation, a 30 h.p. twin-opposed Haacke engine is fitted.
The Entler biplane has not yet been tried out in the air to its full capacity, but it has been designed for 10 hours' non-stop flying capacity. So far a speed of 65 m.p.h. has been attained with the 30 h.p. engine. It will be noted that the wheel shaft of the undercarriage is made in two parts, and that the rudder, divided elevators and the ailerons - which are fitted to the top plane only - are unbalanced. Both the upper and lower planes are one-piece jobs that can be mounted and removed quickly and easily. The petrol tank is fitted inside the top plane. The control of the ailerons is by means of duralumin rods and cables.
The interior structure arrangement of this little machine has been patented by the designer, but beyond that no further information is available at the moment. The external construction does not differ in appearance from that of the Junkers aircraft.
It must be admitted that the Entler Sporting biplane possesses a pleasing appearance, and we await with interest further news of this "novelty."
The principal characteristics of this machine are :-
Span (top) 23 ft. 0 ins.
Span (bottom) 19 ft. 6 ins.
Chord (top) 4 ft. 0 ins.
Chord (bottom) 3 ft. 3 ins.
Gap 3 ft. 11 ins.
O.A. length 16 ft. 9 ins.
O.A. height 7 ft. 9 ins.
Area, main planes 150-6 sq. ft.
Weight, empty 375 lbs.
Designed speed 80 m.p.h.

THE ENTLER ALL-METAL SPORTING BIPLANE: Side view of the latest German effort. The engine is a 30 h.p. Haacke.

The Entler All-Metal Sporting Biplane: Three-quarter rear view. Externally it is similar to the Junkers construction, but differs considerably in its internal construction.
<<   0/0   >>