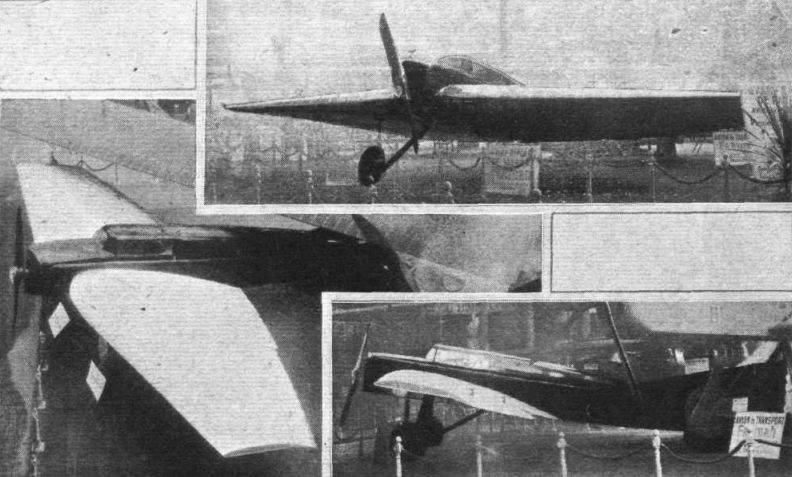 OF the three machines exhibited by Farmans, the most interesting was, perhaps, the little cantilever monoplane two-seater touring 'bus. The large commercial machine, ДальшеMore>>> with a power expenditure of 600 h.p. for 8 passengers, would not appear to be very "commercial," and the bomber was of usual design, except that it was built entirely of metal. As, however, the gentleman in charge of the stand flatly refused our representatives permission to make any sketches, the detailed features of the construction could not have been shown in any case.
The Farman monoplane is, perhaps, somewhat less displeasing to the eye than the majority of Farman machines, but even so it is by no means a pretty machine. The short span and great length, coupled with the very pronounced taper of the wings, gives it a very peculiar appearance, which is not improved by the low placing of the wings, a la Junkers. The machine is built entirely of wood, with the exception of the engine mounting and cowling, and, of course, of the fabric covering.
The fuselage is of rectangular section, and the wing roots are built-up as an integral part of it, being faired into the flat sides of the fuselage. The engine housing is kept very low, and as a glass top has been added to the cabin, the pilot can look out over the top of his engine fairly well. A feature which we do not like very much is that, in order to get into or out of the cabin, the occupants appear to be obliged to hold on to a couple of exhaust pipes running along the sides of the cabin. After the engine has been running some little time, this, might prove annoying. Also, if the machine should turn over on landing, it would seem that it might be difficult for the occupants to emerge.
The wing, as already stated, is a cantilever monoplane, built in three sections, of which the centre section remains in place on the fuselage, while the two end pieces can be quickly detached. The wing is of great thickness and extremely large chord at the body, tapering rapidly both in chord and thickness towards the tips.
The undercarriage consists of two "V's" hinged to the end of the centre-section, and supporting, by rubber shock-absorbers, the bent wheel axles coming down from the corners of the fuselage, much after the fashion of the "BAT Bantam."
The 180 h.p. Hispano-Suiza engine is mounted as a separate unit in the nose, being attached to the main fuselage by four bolts only. The petrol-tanks are carried inside the centre-section of the wing, so that pressure petrol feed is required. The radiator is placed in the nose, car fashion.
The main characteristics of the Farman monoplane are as follows :- Length, 9.5 ms. (31 ft. 2 ins.); span, 10.8 ms. (35 ft. 5 ins.); height, 2.3 ms. (7 ft. 7 ins.); wing area 28 sq. ms. (300 sq. ft.); weight empty, 680 kgs. (1,500 lbs.); fuel, 280 kgs. (620 lbs.); useful load, 160 kgs. (350 lbs.); total loaded weight, 2,470 lbs.; power loading, 13.7 lbs./h.p.; wing loading, 8.23 lbs./sq. ft. No performance figures are available.
<...>

Three views of the Farman monoplane.