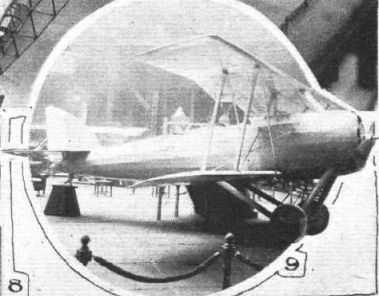 ONE believed that the full name of this firm is Societe d'Emboutissage et de Constructions Mecaniques. The machine exhibited by this firm was a two-seater, ДальшеMore>>> side-by-side school machine of, it was said, metal construction. No particulars were, however, available beyond what one could gather from an external inspection. The machine was fitted up with electric navigation lights, and under the starboard wing was mounted a searchlight, while under the lower port wing was a windmill-driven generator. The engine was a 110 h.p. le Rhone. The somewhat unusual wing bracing (piano wire in duplicate, with wood fairing in between) is indicated in one of the accompanying sketches,

IT is an unfortunate fact that gradually French aircraft firms are acquiring titles so long that it becomes quite impossible to refer to their products by the full title of the firm, with the result that half of the modern French machines are always identified by a series of initial letters. Thus we have CAMS, SCIM, SIMB and SECM. A certain loss of individuality is the inevitable result. Thus when referring to a Farman, or a Bleriot, or a Hanriot, the personality of the chief of the firm always comes to mind. A series of initial letters entirely fail to give to the products of a firm that personal touch, and except by using considerable care confusion is likely to result. One of the firms whose machines are identified by initial letters is the Societe d'Emboutissage et de Constructions Mecaniques, otherwise S.E.C.M. Three machines were exhibited by this firm, one of which was a single-engined night bomber with Salmson engine, and the other two touring or school machines with Hispano engines.
The S.E.C.M. B.N.2 is a two-seater with very large fuselage. The machine is built of metal throughout, except for the covering, which is fabric. The engine, a 500 h.p. Salmson (or so it is stated), is mounted in the nose, and is cooled by two side radiators. Externally, the machine shows little originality, and as it was entirely covered in, it was not possible to ascertain its constructional details, except to learn that the whole structure is of metal (steel and Duralumin). The wing area is 72 sq. m. (775 sq. ft., and the useful load 1,000 kg. (2,200 lbs.). The maximum speed at 2,000 m. is 180 km. (112 m.p.h.), and the ceiling 5,000 m. (16,400 ft.). Sufficient petrol can be carried for a flight of 800 km. (500 miles).
<...>

THREE machines were exhibited by the S.E.C.M. firm, two of which were school machines, while the third was a large single-engined night bomber. Of the two school machines, one was shown complete and the other in skeleton, and as they were very similar to machines exhibited at previous shows it does not appear necessary to deal with them in detail here. A Dewoitine D.1 C.1 was also shown, presumably because the S.E.C.M. build these in series for Dewoitine.
The S.E.C.M. type 12 B.N.2 is fitted with one of the large 600 h.p. Renault engines, and was shown in skeleton so that the detail construction could be examined. Unfortunately the gentleman in charge of the stand had received instructions not to permit detail sketches to be made, and as a special permission for FLIGHT'S artist could not be obtained in time, we regret that we are not able to give sketches showing S.E.C.M. methods of metal construction. Otherwise we should have liked to publish a set similar to that showing Breguet construction, and published in our December 18 issue.
With the exception of a few wing fittings, etc., the S.E.C.M. metal construction employs Duralumin exclusively, and the material is used for the most part in the form of Duralumin tube. Thus, the fuselage is a tubular structure with wire bracing, the struts being joined to the longerons by relatively thin Duralumin plates wrapped around longerons and struts and pressed out to conform to the curvatures of the tubes, while meeting over the centre lines and riveted together. The construction is very pretty, and some of the joints are works of art. The joint of the front chassis strut to the lower longerons, at a point where several struts of the fuselage and engine mounting converged, was in particular a very remarkable piece of work, and the manner in which the S.E.C.M. firm bends and presses the Duralumin plates is perfectly astounding, but one confesses to a feeling that, beautiful as the work is it seems rather unnecessary.
The wing structure of the night bomber consists of a large top plane and a smaller bottom wing. The spars of the latter are in the form of drawn rectangular section tubes, while the upper spars are built-up of sheet Duralumin walls flanged and stamped for lightness and forming a series of N's in front view, and of flat top and bottom flanges riveted to the walls via L-section strips. The flat spar flanges are then reinforced by curved U-section strips placed above and below the top and bottom flanges respectively.
The wing ribs are of tubular construction as regards both flanges and webs, the latter being arranged in a zig-zag or Warren truss formation. Joining is by tubular rivets passing through flanges and lattice bars and through the sheet with which, as in the fuselage, the joint is wrapped. In connection with the S.E.C.M. method of construction it is of interest to note that the firm state that a complete all-metal rib can be produced in 41 minutes, most of the work being done by girl workers. The Duralumin plates used in making the joints are, of course, stamped out from the flat sheet, and once the necessary dies are made probably the work is fairly rapid. Thus, for quantity production the S.E.C.M. method is probably both rapid and reasonably cheap.
The main characteristics of the S.E.C.M. 12 B.N. 2 are: Length o.a., 14 m. (45 ft. 11 in.); wing span, 19 m. (62 ft. 3 in.); wing area, 85 sq. m. (915 sq. ft.). Weight empty, 1,760 kgs. (3,870 lbs.); fuel and oil, 700 kgs. (1,540 lbs.); useful load, 940 kgs. (2,070 lbs.); total loaded weight, 3,400 kgs. (7,700 lbs.). Top speed, 200 km./h. (125 m.p.h.); landing speed, 80 km./h. (50 m.p.h.). Climb to 5,000 m. in 45 minutes. Duration 6 hours. 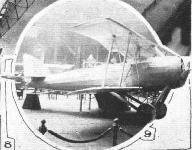 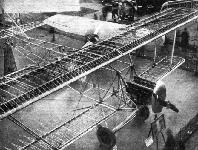 The S.E.C.M. all-metal night-bomber, type 12 B.N.2, is shown in skeleton. The metal construction is very pretty, but one doubts whether some of the complicated joints are really necessary.