THE VICKERS "VIGET" LIGHT 'PLANE: This photograph gives a good idea of the ease with which this machine can be wheeled along by one man. For transport over longer distances the wings are folded.

The Vickers "Viget" at Lympne: Wheeling the machine out for a flight. Note the pilot's name painted on the side of the fuselage.

THE VICKERS "VIGET": Front, three-quarter front, and three-quarter rear views. On the left the machine is coming in after her first flight, piloted by Capt. Cockerell.

THE VICKERS "VIGET": On the left, a view into the cockpit, and, on the right, the mounting of the Douglas engine. Note the chain reduction gear. 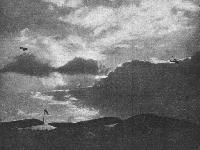 EVENING AT CROYDON DEMONSTRATION: On the left, in the air, is seen the Vickers "Viget" light aeroplane and on the right the Avro light monoplane. 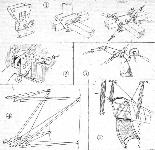 THE VICKERS "VIGET" LIGHT 'PLANE: Some constructional details - 1. Analytical sketches of the fuselage fittings, which are made from Duralumin. 2. Sketch showing hinge on lower rear spar. 3. Locking pin with "umbrella" catch on top front spar. A small tube is used for slipping over the end of the pin, compressing the catch so that it will allow the pin to be withdrawn. 4. Diagrammatic perspective view of the tubular engine mounting. The upper tubes brace the top of the sprocket casing, while the engine is supported on the two front transverse tubes at the bottom. 5. Access to the pilot's cockpit is facilitated by a door in the coaming.