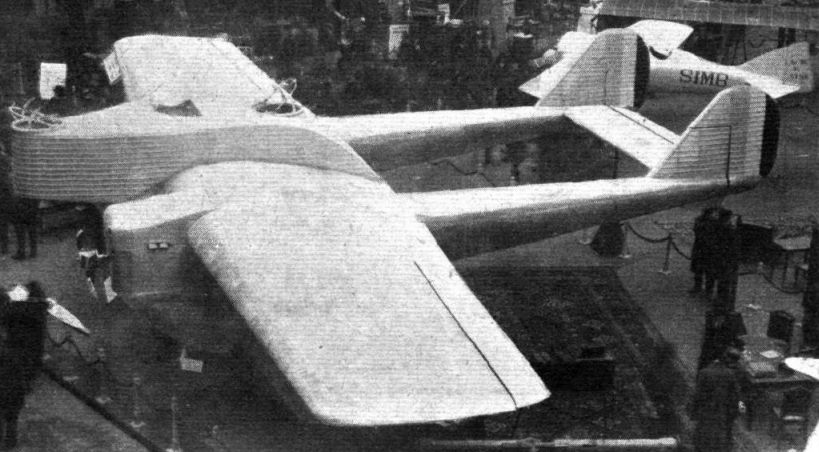 A MACHINE of very unorthodox design is that exhibited by the famous Creusot firm of Schneider et Cie. At first glance one is tempted to dismiss the machine as a "freak," ДальшеMore>>> the twin fuselages, the large central nacelle for the crew, and the two combined engine housings and undercarriages all tending to convey the impression that the machine was simply built to use up as much Alferium as possible (this being a new aluminium alloy produced by the Schneider firm). On closer examination, however, one begins to realise that there is more in the design of the machine than is apparent at first, and that it is at any rate entitled to serious consideration even if one cannot quite agree with all the details of the design.
Fundamentally the Schneider monoplane is designed to give a good view and field of fire in all directions. It does not appear, however, that this has been altogether attained, as although the field of fire is exellent from the forward gunner's cockpit, and reasonably good aft from the rear cockpit, there would seem to be a "blind" zone laterally from the rear cockpit. Provision is made for firing downward from this cockpit through a trap door in the floor, The armament consists of six machine-guns, and wireless outfit and camera are also carried.
The large monoplane wing is in a single piece, and must present rather a problem as regards transport. The nacelle containing the crew can be detached from the wing in a fairly short time, as can also the rear portion of the two fuselages, the joint occurring just aft of the trailing edge of the wing. The wing is constructed entirely of Alferium, there being two main spars and a lattice work at top and bottom to form, with the spars, a sort of box. The wing covering is also of Alferium, and is corrugated at intervals of approximately 3 inches.
The two fuselages, extending forward to form engine housings and undercarriages, are also entirely built of Alferium, but in this case the covering is in the form of plain sheets (i.e., not corrugated). At the stern each fuselage carries a fin and a rudder, and the large fixed tail plane runs right across, from one fuselage to the other, a one-piece elevator being hinged to it.
All controls are operated by rods and tubes, no cables being employed, and all cranks, etc., used in the control system work in ball bearings. This is stated greatly to lighten the work of the pilot, and certainly recent de Havilland aeroplanes in which ball-bearings have been used for the controls are remarkable for the ease with which the joy-stick can be manipulated.
The two undercarriages are in the form of parallel Vees, one pair for each wheel, consisting of a forward large box-section legs and smaller rear legs. The axle rests in a movable fork, sprung from the fixed vees by rubber shock absorbers situated inside and near the upper end of the fixed vees. As the whole of the undercarriage is enclosed the head resistance is probably very low, but it would appear that the chassis cannot be particularly strong laterally unless the weight is considerable. The wheel track is, of course, very wide, and there should be very small chance of the machine turning over on to a wing tip.
The two 400 h.p. Lorraine-Dietrich engines are supported on cantilever structures joined partly to the wing structure and partly to the fuselages. They are entirely cowled-in, and a radiator is mounted on each side of the engine nacelles. The petrol tanks are placed aft of the engines, and in this position would seem to afford a maximum degree of safety from fire, since, should a tank be holed by a machine-gun bullet, the petrol would simply run out without touching any portion of the machine. As far as we were able to discover, no jettison valves were fitted, but this could be very easily done if desired, the arrangement of the tanks lending itself particularly to the installation of such valves.
The main characteristics of the Schneider Sch.10, type M, are as follows: Length o.a., 11-7 m. (38 ft. 5 in.); total height, 3-3 m. (10 ft. 10 in.); wing area, 57 sq. m. (613 sq. ft.); weight empty, 2,650 kgs. (5,830 lbs.); useful load, 1,000 kgs. (2,200 lbs.); total loaded weight, 3,650 kgs. (8,030 lbs.). The estimated top speed at an altitude of 5,000 m. (16,400 ft.), at which the machine intended to operate, is 220 km./h. (137-5 m.p.h.), and the ceiling is estimated at 7,000 m. (23,000 ft.).

THE ALL-METAL SCHNEIDER TWIN-FUSELAGE MONOPLANE: This machine, built of a new aluminium alloy produced by the famous Creusot firm under the name "Alferium," carries an armament of six machine-guns.

THE ALL-METAL SCHNEIDER TWIN-FUSELAGE TWIN-ENGINED MONOPLANE: The sketch on the right shows one of the engine nacelle-undercarriage fuselages. The petrol tank is mounted aft of the engine and landing gear, so that in case of puncture by machine-gun fire the petrol is drained out without danger of setting the machine on fire. On the left is shown the corrugated wing covering and the manner of its attachment at leading and trailing edges.
<<   0/0   >>