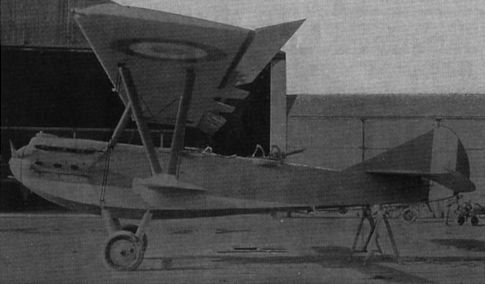 
Two machines were exhibited by Francois Villiers, a comparative newcomer to the French aircraft industry. Of these one, the Villiers type No.II C.2, was an avion marin of the type designed to be able to alight on the sea in case of engine trouble. This machine is similar to other French machines of its class in that the undercarriage, a wood structure, is watertight so as to provide sufficient flotation to keep the machine from sinking until it can be picked up. The bottom plane, which is of smaller span and chord than the top plane, is attached to the watertight fuselage approximately halfway up the sides, or roughly at the level of the water line, and two wing tip floats provide lateral stability when the machine is at rest on the water. The undercarriage can be dropped before alighting in the sea, the propeller being locked in a horizontal position. The machine is otherwise of orthodox design, the only unusual feature being necessitated by the purpose for which the machine was designed. Owing to the raising of the bottom plane up to the centre line of the fuselage, the top plane is placed very high in relation to the body, doubtless in order to retain a good gap/chord ratio.
The other machine exhibited was a type V, two-seater night fighter equipped with landing lights and other equipment necessary to its function. In place of the Vee interplane struts of the avion marin the type V had single "I" struts built up of rectangular section duralumin tubes faired with sheet aluminium, and provided with incidence adjustment in the form of short rods from the main tube to the two wing spars. The machine is of normal construction, with ply-wood covered fuselage and wood wing spars and ribs. It is a clean-looking job and is credited with a top speed at ground level of 224 km./h. (139 m.p.h.).

The Villiers II was unusual in having a watertight hull-type fuselage to allow it to alight on water in emergency.

The Villiers Type II, 450 h.p. Lorraine, is a landplane capable of floating after a descent on the sea. It then has to be hoisted on board a vessel.

The Villiers ''Avion Marin'' has a very small bottom 'plane. Note the wing tip float and the Lamblin radiator on the leading edge. The undercarriage can be dropped, part of the release gear being visible in this sketch.