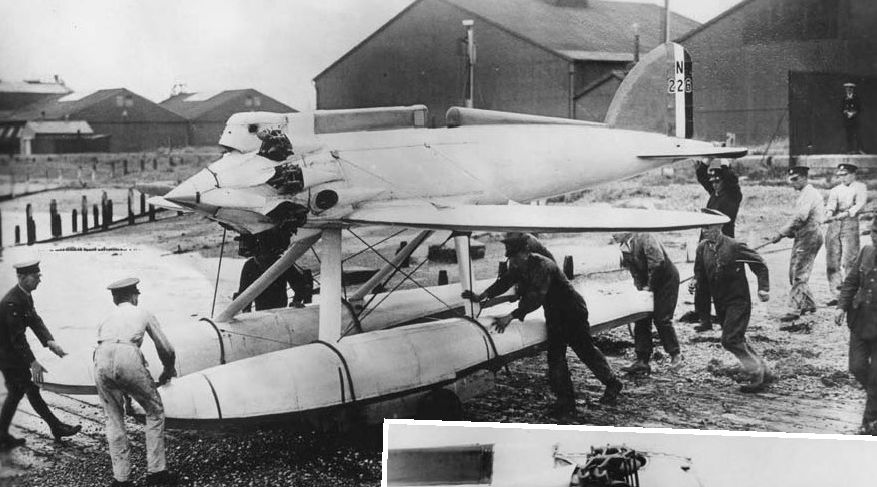 IN last week's issue of FLIGHT we were able to give some particulars of two of the three British challengers for this year's Schneider Trophy contest, and we now follow this up with some brief notes on the third machine constructed for this important event.
As announced last week, three types of high-speed seaplanes were constructed to Air Ministry order - our participation in this year's contest being a "Service operation" - the Gloster-Napier IV, the Supermarine-Napier S-5 (both of which types were dealt with last week), and the Bristow-Short-Bristol "Crusader." On Thursday last this latter machine was "on view" at the Felixstowe Air Station, and we are thus enabled to give herewith some particulars and illustrations of the "Crusader." We cannot, of course, as explained before, give anything but a general outline of its characteristics.
The "Crusader," like the "S-5," is a low-wing mono-seaplane, designed for the firm of Lieut.-Col. W. A. Bristow, Consulting Engineers and Aircraft Designers, by Mr. W. G. Carter - whose name is not unfamiliar to many of our readers, and who was at one time designer to the H. G. Hawker Engineering Co.
It was constructed by Short Bros., Ltd., of Rochester, and is fitted with a Bristol "Mercury" air-cooled radial engine. This latter feature alone makes the "Crusader" a machine of more than usual interest, as this is the first time that a machine of this type - a high-speed racing seaplane - has been fitted with an air-cooled radial engine (excepting, of course, the early rotary engines). In fact, it was with the object - apart, of course, from-bringing back the "Cup" - of testing out the possibilities of high-speed seaplanes fitted with air-cooled engines that the "Crusader" was designed.
An air-cooled engine naturally presents a greater frontal area than a advantages of the air-cooled engine - low weight per horse-power being, perhaps, the most important - made this an experiment of considerable importance. It is certainly an interesting problem, and in the case of the "Crusader" called for much research in order to devise a means of reducing head resistance and at the same time maintaining sufficient cooling for the cylinder heads.
This has been successfully accomplished by means of a series of metal "helmets" which fit over each cylinder head and merge into the fuselage so as to follow the streamline as much as possible. With these helmets in situ, the machine looks like a Crusader indeed.
The trials that have already been carried out with the "Crusader" have demonstrated that the "experiment" has met with no small measure of success, in which the Bristol company can claim, in the production of the "Mercury," a considerable share. It may be of interest to note that the weight of the whole machine, complete with engine, is less than what was considered in the early days of aircraft development to be a reasonable figure for an engine alone!
The fuselage of the "Crusader," which is well streamlined (of cigar shape) is of monocoque form, mainly constructed of double-plank mahogany, the forward and engine portion being of steel tube. Special attention has been directed towards the position of the pilot, who is located near the e.g., a little way back from the wings, where he obtains a good all-round view. It will be noted that the stern of the fuselage terminates in a sharp point a short distance behind the tail surfaces. A continuous fairing extends along the top of the fuselage from the top engine-cylinder to cockpit and from cockpit to fin, as in the S-5.
The wings are of medium thickness, with streamline wire bracing, and are neatly faired into the lower portion of the fuselage. While the vertical fin is large, the elevators are comparatively small.
The floats, of metal, have been designed specially for the machine by Short Bros., under the direction of Mr. Gouge, Chief Designer. They have been evolved along new lines, after a considerable amount of research and experiments with models in the testing tanks at the Rochester works. We are informed that they have proved most satisfactory, and the machine takes off and lands very easily, there being a minimum of spray, and their air resistance is very low.

As regards the Bristol "Mercury" engine fitted in the "Crusader," we are afraid we can say very little just now. There is no doubt, however, that it constitutes one of the biggest advances yet made in the development of the air-cooled radial engine. The "Mercury," which is probably the lightest engine for the power developed in the world, is an improved version of the famous "Jupiter," having, as with the latter, nine cylinders disposed radially around the crankshaft. While its power is considerably greater, its frontal area has been reduced, and it is, in fact, a remarkably compact engine for its power.
A special metal airscrew is employed, the blades of which are constructed of a secret alloy, ground and polished to a very high degree of efficiency. A sharp pointed metal spinner is fitted over the boss.
While the "Crusader" is not expected to be quite so fast as the Supermarine-Napier S-5, it can, however, claim to be the fastest machine fitted with an air-cooled engine in the world, and also the lightest loaded machine per horsepower. During its trials the "Crusader," despite its high speed, proved to be particularly easy to fly, and possessed an excellent degree of stability and manoeuvrability. Another point worthy of note is that no important modification has been necessary at any stage since its first flight!
<...>

The Short-Bristow Crusader was designed and built for the 1927 Schneider Trophy Race, Fedden realising that, unless he could make a compelling case for radial engines, liquid-cooled in-line engines - like those fitted to the rival Supermarine racers - would be seen as the only option for any future fighter designs.

The Short "Crusader" (with Bristol racing "Mercury" engine) designed by Mr. Carter as a Schneider Trophy machine. The crossing of the aileron cables caused the machine to crash at Venice before it had a chance to show what it could do.

THE AIR-COOLED CHALLENGER: Two views of the Short-Bristol "Crusader" mono-seaplane. Each of the nine cylinders of the Bristol "Mercury" air-cooled engine are streamlined by "helmets" - one of which is shown in situ.

THE THIRD BRITISH SCHNEIDER CHALLENGER: Front view of the Short-Bristol "Crusader" mono-seaplane, which is fitted with a Bristol "Mercury" air-cooled radial engine.

SOME OF THE "CRUSADERS": Reading from left to right - Maj. Abell (Bristol Co.); Mr. W. G. Carter (designer of the "Crusader"); Lieut-Col W.A.Bristow; Sq.-Ldr. Slatter (chief pilot of the team); Mr. Oswald Short (constructor of the machine); next to Mr. Short but obscured is Mr. Gouge, his chief designer; and two of the team, Flying Officers H. M. Schofield and T. H. Moon.

The "Crusader's" Prime-Mover: The Crusader was fitted with a special racing version of the Jupiter, designated Mercury I, incorporating an ingenious helmeting system for the cylinders, which are seen here without all but the top streamline helmets. 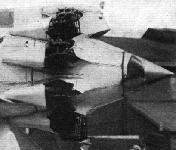 "Helmets" gave a good aerodynamic improvement, but bad cooling. The Short Crusader racing seaplane had its Bristol Mercury similarly cowled. Only one "helmet" is shown in place here.
<<   0/0   >>