<...>
The Avia B.H.29 is a two-seater biplane designed for elementary training, and may be fitted either with the 85 h.p. or the 120 h.p. Walter engine. Robust construction is, perhaps, ДальшеMore>>> the outstanding characteristic of this machine, but the aerodynamic qualities are claimed to be good also, not especially in the matter of "performance" in the usual sense of the word, which is scarcely necessary in a school machine, but in controllability, stability and freedom from vices such as falling into a spin when stalled.
The Avia B.H.29 is a heavily staggered single-bay biplane, with its top wing of rather shorter span than the lower. Doubtless this has been done in order to reduce end loads in the spars of the upper plane, and to strengthen the top wing, ply-wood covering is used for this, although the lower wing is fabric covered.
The flat-sided fuselage is of the construction used by the Avia firm for years: four longerons connected by a number of formers, and covered with ply-wood. The wings are also of wood construction, with box spars having spruce flanges and ply-wood webs. The external bracing is of the usual single-bay type, with N struts of welded steel tube of streamline section. Adjustment is provided on the X struts for altering, within limits, the angle of incidence of the wings. Ailerons of normal wood construction are provided on the lower wing only, and are operated by rods and crank levers, no cables being used.
In order to reduce the number of spares, the tail has been so designed that the rudder is identical with the elevator flaps, with which it can be interchanged. The tail surfaces are of welded steel tube construction, and wire braced.
The machine being intended for school work, a common cockpit accommodates pilot and pupil, which arrangement is claimed to facilitate instruction. The pupil normally occupies the front seat, and dual controls are fitted, which can be thrown out of gear instantly by the instructor should the pupil make a mistake under dangerous circumstances.
The undercarriage of the B.H. 29 is of the "split" type, with the axles and radius rods hinged under the centre line of the fuselage floor, and the telescopic struts running to the top longerons. The wheel track is wide (about 7 ft), and a fairly long travel is provided, the shock absorbers being in the form of rubber blocks working in compression. Partly to reduce air resistance, and partly to protect the rubber against dirt and light, a streamline casing is placed around the rubbers, as shown in one of our sketches.
The power plant is, as already mentioned, a Walter engine of either the 85 h.p. 7-cyl. or 120 h.p. 9-cyl. type. It is mounted on an engine plate attached to the fuselage at four points only, and petrol is supplied by gravity feed from two tanks mounted in the top plane. The oil tank is behind the engine, in the top fairing of the fuselage.
Following are the main dimensions of the Avia B.H. 29: length, overall, 8'035 m. (26-35 ft.); wing span, 10 m. (32-8 ft.); wing area, 25 sq. m. (269 sq. ft.). Weight, empty, 545 kg (1,200 lbs.). The load is composed as follows: pilot and pupil, 160 kg. (352 lbs.); petrol, 70 kg. (154 lbs.); oil, 10 kg. (22 lbs.); various gear, 30 kg. (66 lbs.). Total load, 270 kg. (594 lbs). Total loaded weight, 815 kg. (1,794 lbs.). These figures relate to the machine as fitted with the 85-h.p. engine. With this engine, the performance is as follows: Top speed near ground, 135 km./hr. (84 m.p.h.); cruising speed, 120 km./hr. (75 m.p.h.); minimum speed, 60 km. hr. (37 m.p.h.); practical ceiling, 2,200 m. (7,260 ft.); climb to 1,000 m. (3,280 ft.) in 12 mins.; climb to 2,000 m. (6,560 ft.) in 40 mins. Range, 420 km. (260 miles.)
<...>

A CZECHOSLOVAK VISITOR: Piloted by Captain Hamsik, the Avia B.H.29 is expected at Croydon aerodrome during the next few days. The machine is a school type and is said to have exceptionally good controllability, even in stalled flight. The engine is a Walter. 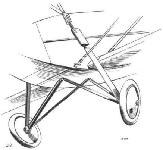