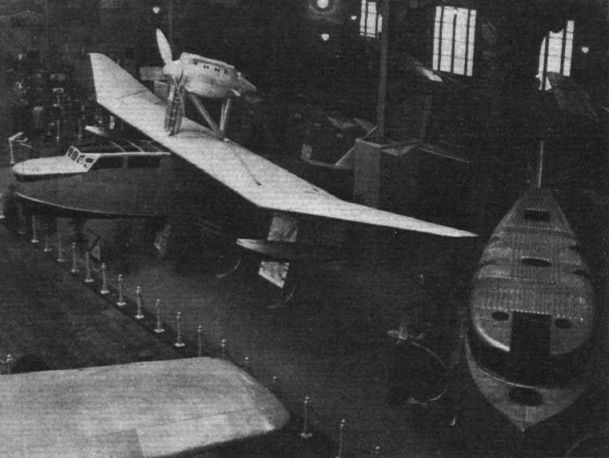 The Chantiers Aero-Maritimes de la Seine exhibit one complete machine, and the boat hull of another. Hitherto, this firm has adhered to the production of wood-planked hulls but this year both machines ДальшеMore>>> have metal hulls, planked with duralumin.
The C.A.M.S. 80 is a very unique looking machine. It is a monoplane flying boat, with a700 h.p. Lorraine "Orion" engine mounted above the wing and driving a tractor airscrew. The monoplane wing appears to be in one piece, and for the greater part of its span is perfectly straight, i.e., with no dihedral. The wing tips, however, are set at a pronounced dihedral, not unlike the system used in the Navarro "Chief." In the case of the C.A.M.S. 80, however, the reason for this arrangement is obviously that of getting the wing tips clear of the water. The outboard wing floats, which appear to be of very small displacement, are placed at the points where the dihedral wing tips join the straight portion of the wing, and the large span wing is braced by eight streamline wires only, four below and four above. The type 80 is intended for reconnaissance and bombing, and its future history should be interesting.
<...> 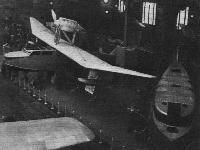