THE STOUT "SKY CAR”
Exhibited for the first time at the National Aircraft Show at Detroit, this machine is a "pusher" cabin monoplane of all-metal construction, fitted with an inverted four-cylinder in-line air-cooled Rover engine of 75 h.p. The occupants ДальшеMore>>> are seated in tandem, one of the least attractive features of the machine

MR. "BILL" STOUT, who created the Ford tri-motored monoplanes now so well known all over the has now produced another "Tin Lizzie," which is shown for the first time at the Detroit Show. The new machine is a "pusher" monoplane, in which the occupants sit in tandem ahead of the wing. The new machine has been named the "Sky Car," but doubtless it will very soon be given some nickname appropriate to its somewhat unusual appearance.
There is no doubt that the "pusher" type of aeroplane is being revived after having been moribund for many years. In almost every country one sees attempts made to resurrect the "pusher," and when one remembers the comfort of flying in machines of the old Maurice and Henry Farman types, this is not surprising. The engine noise which reaches the occupants seems to be much smaller; there is no buffeting due to slipstream on windscreens or cabin, and oil and fumes from the engine do not reach the occupants. The old "box kites" were not very efficient aerodynamically, and so when, during the war, speed had to be obtained at all costs, the tractor won the day, and has kept the lead until now. But, as we have said, there are obvious signs of a revival, and the Stout "Sky Car" is one American attempt to provide car comfort in the air.
The "Sky Car" is of all-metal construction, and its general design is, if unorthodox, not unpleasing. The first thing to decide in the design of a single-engined "pusher" is whether the tail is to be carried on an extension of the fuselage or on a separate structure. The latter is likely to be lighter and stronger, but the former probably will have a rather lower drag. In the Stout "Sky Car" the open tail girder method of carrying the tail has been adopted, and consists of three booms braced together, two at the top (to the wing) and one at the bottom (to the heel of the fuselage). As a result of this arrangement, the swivelling tail wheel is placed under the rear end of the abbreviated fuselage, and not under the tail, so that landing shocks do not have to be taken by the tail booms.
The pilot and passenger sit tandem fashion in a well-lighted cabin, ahead of the wing, and the view should be good. Two bulkheads separate the cabin from the engine, so that but little noise should be heard in the. cabin. The inverted Rover engine is nicely faired-in, and there is an adjustable scoop which admits more or less cooling air to the engine during flight.
The ailerons found in orthodox aircraft have been replaced by pivoted wing tips similar to the "controllers" used by Capt. Hill in the "Pterodactyl," but they serve, of course, for lateral control only.
Petrol is carried in two tanks in the leading edge portions of the central section of the engine, from which position the fuel is fed by gravity to the engine.
No performance figures are available, but the Stout "Sky Car" has a span of 43 ft. and a length of 23 ft. 6 in. The wheels are fitted with brakes, and the nose is strengthened so that the wheels may be locked and the fuselage touch the ground without doing any damage.

THE STOUT SKY CAR": Three-quarter front view from above. Lateral control is by pivoted wing tips, instead of by ailerons. 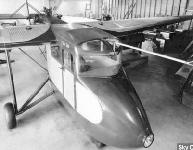