The cabin of the "Mouse" is light and airy, as it is fitted with a form of sunshine roof. The small locker in the wing root can be used for tools and log books. The luggage locker, as shown, holds three suit cases, which are supplied with the machine.

This front view show the neat design of the undercarriage. The clean engine cowling around the "Gipsy Major" and the small space taken by the "Mouse" when folded should be noted.

COMPER "MOUSE" IN ACTION: These photographs, secured at Heston on Saturday last, give a very good idea of the latest Comper machine. Retractable undercarriage and "sunshine roof" are features of the design. The engine is a de Havilland "Gipsy Major." The pictures were secured just before Flt. Lt. N. Comper took the machine to Martlesham for its official tests.

The centre section is built as a separate unit. 1, an adjustable seat sliding on runners. 2, the starboard wing fuel tank. 3, small lockers for tools and log books. 4, a control column, working the push-push rods which leave the wing at 5, where they end in rubber buffers. 6, the elbow joint upon which the wing folds. 7, an undercarriage wheel retracted. 8 and 9, the wing root spar bolts. 10, the centre attachment point for the fuselage. 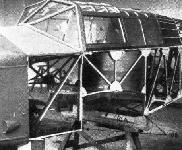 The front part of the fuselage drops over the centre section of the wing and is attached by three bolts at 10a and 10b. 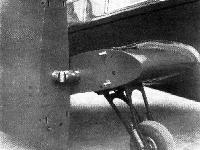 This shows the method by which the wings are folded on a central joint.

Details of the retractable undercarriage. 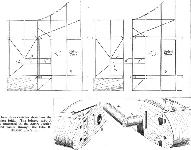 These three sketches show how the wing folds. The jointed tube A is anchored in the centre section and passes through the tube B.

This explains the general structure of the wing. 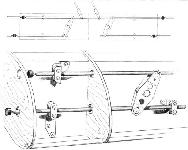 A sketch explains the action of the push-push rods for working the ailerons, while at the same time providing a system which does not have to be uncoupled when the wings are folded.

The tail plane on the left has a boxed wooden spar with steel ribs. The rudder on the right is all steel. 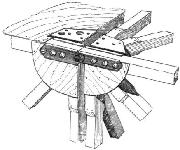 A fuselage joint between the rear portion and the cabin; large plywood biscuits and steel fish plates are used.

The tail wheel mounted on a spring steel fork.