Illustrated on this page is Miss Los Angeles, a small racing monoplane, built for Roy Minor, the American racing pilot, which won second prize in the Thompson Trophy Race at Cleveland, Ohio, recently. The machine was built by the Lawrence W. Brown Aircraft Co., of Los Angeles. On the power of a Menasco "Buccaneer" C.6.S. supercharged engine, the machine flies at between 250 and 270 m.p.h. A single-seater fighter version is being developed.

THREE from ABROAD
Monoplanes for the Sportsman, Air Force and Navy: British Features

Brown-built racing monoplanes are held high in popular esteem at the American National Air Races, and the success they have achieved has encouraged the manufacturers, the Lawrence W. Brown Aircraft Company, of Los Angeles, to build a machine suitable for private ownership, the design being based on that of Miss Los Angeles, perhaps the best-known Brown model. Although the new machine is primarily a civil type, negotiations have been proceeding with several governments which may result in a military version for fighting or observation.
Essentially, the machine is a wire-braced low-wing monoplane with fixed undercarriage. The construction is mixed: welded steel tubing is used for the fuselage; the wings are of wood with wire bracing; and the covering is of fabric, except for the engine cowling and decking round the pilot’s cockpit.
Although designed as a two-seater with dual controls the first machine of the series has been arranged as a long-range single-seater to special order. A sliding hatch is fitted over the cockpits.
The chief distinction between the machine and its sporting ancestors is the provision of Handley Page automatic slots, manually controlled slotted flaps and slotted ailerons.
A further outstanding feature is the use of the newest 250 h.p. supercharged Menasco six-cylinder inverted, inline, air-cooled Super Buccaneer engine, which is installed in a cowling arranged on the N.A.C.A. principle with an annular slot at its rear end. The power plant is rated at 6,000 and will deliver 200 h.p. at sea level for take-off. Although it has been announced as optional equipment for the new Lockheed 12 twin-engined transport, and will be specified for one or two of this year's crop of new machines for the National Air Races, it is introduced commercially for the first time in the new Brown.
An unusually wide speed range is claimed, the landing speed being about 40 m.p.h. and the maximum 205 m.p.h.
The prototype has been specially equipped for a private owner and carries blind-flying equipment, two-way radio and engine temperature thermocouple. A fully controllable Hamilton Standard airscrew is likely to be installed in the near future. The main data are as follows: Span 32 ft., length 26ft., weight empty 1,850 lb., gross weight 2,650 lb., wing area 150 sq. ft., wing loading 17.6 lb./sq. ft., power loading 10.6 lb./h.p., maximum speed 205 m.p.h., cruising speed 190 m.p.h., landing speed with flaps 40 m.p.h., landing speed without flaps 60 m.p.h., service ceiling 18,000 ft., normal cruising range 600 miles.
<...>

TO BREAK THE CAUDRON RECORD: A small high-speed low-wing monoplane, designed and built by Larry Brown, of Santa Monica, California, to attack world's records in its class. It is fitted with a 185 h.p. "Menasco" 4 cyl.-in line air-cooled engine, and is claimed to have a speed round about 240 m.p.h.
B-2 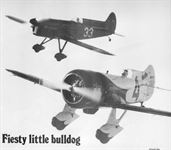 The Gee Bee with the reproduction of Larry Brown's Miss Los Angeles keeping close company. Both aircraft are the work of Ed Marquart of Flabob Airport, California.

FLOR DE AERIAL: This cigar-like monoplane is the Miss Los Angeles, built for the American racing pilot Roy Minor
B-3

The sporting lines of the new Brown B-3 monoplane are seen to advantage here. 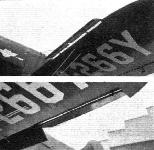 "Close ups" of a Handley Page slot and the flap and aileron arrangements on the new Brown monoplane.
<<   0/0   >>