The first Gripen E, 39-8, over Ostergotland, southern Sweden on its June 15, 2017 first flight with Marcus Wandt at the controls.

Aircraft 39-8 in the engine test cell at Linkoping. Note the large ducts positioned over the aft electronic, environmental control system exhaust to remove all plumes away from the engine's exhaust.

US Army soldiers board a C-130J Hercules from the 61st Airlift Squadron, for a paratroop drop at Fort Bragg, North Carolina.

A US Marine Corps MV-22B Osprey refuels during a mission in support of Weapons and Tactics Instructor course 1-17 at Marine Corps Air Station Yuma, Arizona.

This image shows to good effect the type of terrain VMU-4 has to contend with while operating out of the HOLF. While undeniably scenic, Camp Pendleton's large hills force the RQ-7B to higher altitudes to maintain electronic line-of-sight with the ground control station. In the foreground are two of VMU-4's ground control station vehicles. The GCS is effectively the ‘cockpit’ of the RQ-7.

VMU-4 is the last operator of the AAI RQ-7B Shadow UAS in the US Marine Corps, and will begin transitioning to the Boeing-Insitu RQ-21A Blackjack early next year. The wildlife survey missions flown in August 2017 were actually the squadron's penultimate flight operation with the Shadow.

The Shadow’s primary payload is the IAI POP300 electro-optical/ infrared sensor turret, equipped with a laser designator. The POP300 can generate ten-digit target coordinates, precise enough for GPS-guided weapons, but also useful for other functions, like pinpointing where a southern mule deer was spotted.

A ‘short-wing’ RQ-7B awaits assembly at the HOLF. With six hours endurance and Camp Pendleton’s ranges only a short flight away, VMU-4 typically opts for the short-winged Shadows for local missions, versus the long-winged variant, which offers nine hours endurance. Capabilities between the two are the same, only the long-wing RQ-7 takes longer to defuel after shorter missions.

Marines inspect an RQ-7 launcher prior to sending a Shadow up on a wildlife survey mission. Most of VMU-4's Marines are reservists, and the wildlife survey flights were scheduled for one of the squadron’s monthly drill weekends.

One of VMU-4’s Marines inspects the main antenna on a ground control station prior to a night-time wildlife survey mission.

The second survey flight of the weekend was cancelled when clouds moved into the area almost immediately after the RQ-7B for this mission was launched. Looking at the mission payload operator’s screen, it is clear just how thoroughly these clouds obscure the ground.

A typical RQ-7B crew consists of an air vehicle operator (left) who flies the aircraft, a mission payload operator (right) who operates the sensors and communications payloads, and an unmanned aircraft commander (UAC, not pictured), an officer in a nearby command centre. The UAC is often accompanied by an intelligence specialist assigned to the squadron. On this flight, the UAC was accompanied by game wardens and wildlife biologists. Instructors often sit in on RQ-7B flights, which is the case with the Marine pictured at far left in this image. 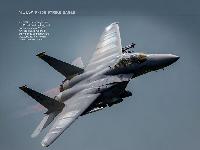 An F-15E Strike Eagle over the Grand Bay bombing and gunnery range at Moody Air Force Base, Georgia, during close air support and weapons training. 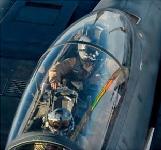 An F-15E approaches the flying boom of a KC-10 Extender for aerial refuelling during a strike mission in support of Operation Inherent Resolve.

The KC-390 was designed from the outset to be an air refuelling aircraft for both fixed and rotary wing receivers. Fuel is transferred via removable Cobham underwing pods. Aircraft PT-ZNF has already conducted stability tests using high and low-speed drogues. Dry contact air refuelling tests will be conducted before the end of 2016. Up to three auxiliary fuel tanks can be installed in the cargo bay for this role.
The Cobham 912E pod utilises the latest technology for the KC-390 to meet the aircraft’s high performance criteria including its ability to satisfy a wide number of receivers at extended ranges.

An artist’s illustration of a Block III F/A-18F Super Hornet loaded with a Lockheed Martin ASG-34 Infrared Search and Track pod on the centreline pylon.

Aircrew are winched off the flight deck and into HMAS Parramatta’s embarked MH-60R Seahawk.

A Royal Australian Navy MH-60R conducts anti-submarine warfare exercises with HMAS Rankin off the coast of New South Wales in the vicinity of Jervis Bay.

The embarked aviation department with an MH-60R in the hangar on board HMAS Perth.

Airmen from the 61st Airlift Squadron remove a pallet from the back of a C-130J on an airstrip in Port-au-Prince, Haiti in support of United States humanitarian relief efforts in October 2016.

The aircrew of C-130J, radio call sign Raven 11, in a right-hand turn over Arkansas.

Loadmasters from the 61st Airlift Squadron look out the back of a C-130J Hercules during exercise Mobility Guardian at Joint Base Lewis-McChord, Washington on August 7, 2017.

The co-pilot of C-130J, radio call sign Raven 11, observes the Arkansas River during a low-level training flight from Little Rock.

KC-46A Pegasus N462KC arrives at Travis Air Force Base, California on March 7, 2017. Travis has been selected as one of the preferred locations for the next two active-duty-led bases to operate the KC-46A. 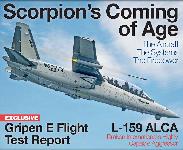 Scorpion N532TX over the Atlantic Test Range loaded with an HMP-400 heavy machine gun pod on the left and right side middle stations. The aircraft's payload bays can be seen on the fuselage underside.

A shot of the Boeing-operated F-15E test and demonstrator aircraft, serial number 86-0183, in the advanced F-15 Eagle configuration with a multi-role weapon payload.

The Autonomic Logistics Information System is intended to be the same for all users of the F-35. Here a US Air Force and Royal Air Force technician study an ALIS display at Eglin Air Force Base, Florida.

A 568th Electronics Maintenance Squadron technician at Robins Air Force Base, Georgia, removes a faulty circuit card assembly from a remote input/output unit, which is part of the F-35's communication system.