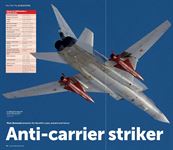 Tu-22Ms under repair and upgrade at the Kazan plant.

A Russian Air Force Tu-22M3 loaded with a single Kh-22 missile photographed by a Kongelige Norske Luftforsvaret F-16 during a standard interception in 2014.

The tail configuration of a Tu-22M3 showing the gun turret and electronic warfare sensors.

A pair of Russian Air Force Tu-22M3s in a slick configuration.
Russia's air campaign in Syria is not the first for the Tu-22 Backfire. The 124-tonne bomber was also used in Afghanistan, Chechnya and Georgia.

Front and aft cockpits of a Tu-22M3 cockpit.

This image of Tu-160 11 Vasily Senko at Engels Air Base shows the vertical stabiliser rotated to the right.

Tu-160 10 Nikolay Kuznetsov on final approach to Engels Air Base.

In March 2016, Tu-160 ‘Valentin Bliznyuk' was seen in the Kazan factory probably being upgraded to Tu-160M standard with new radar and avionics. In 2006, the same aircraft completed the first-stage of modernisation to Tu-160M1 standard. The two unfinished airframes seen in the background will probably serve as new Tu-160M2 prototypes.

Tail configuration of a Tu-160 showing the electronic countermeasure sensors.

A Kh-101 missile moments after release from the weapon bay of a Tu-160 ‘15’ Vladimir Sudets before rocket motor ignition bound for a target in Syria on November 17, 2015, the first day of combat use for both the bomber and the missile.

Two hydraulic trapeze arms eject a Kh-101 missile out of a Tu-160's the left side weapon bay.

Tu-160 ‘Aleksandr Golovanov’, then dubbed ‘Ilya Muromets’, side number 05 and serial number 7-05 (the fifth aircraft of the seventh production batch), was the lead aircraft in an air parade to mark the 50th anniversary of Victory Day on May 9, 1995.

Control panels and instruments of the self-defence operator's workstation.

HMNZS Te Kaha is currently undergoing upgrades, and future Seasprite SH-2G(I) improvements will be based around the modifications.

Seasprite SH-2G(I) NZ3611 in the hover prior to lifting an underslung load from the cab's hook, a fitting that allows the anti-submarine warfare helicopter to be used for humanitarian and vertical replenishment tasks.

The Kongsberg Penguin-equipped SH-2G(I) gives the frigates a credible anti-surface capability. This example, with its fins folded, is a training missile.

Air Force engineers and technicians are responsible for the maintenance and serviceability of the aircraft, seen here in 6 Squadron's hangar.

Note the Picatinny rail on the foresight of the door-mounted MAC 58 7.62mm machine gun, allowing the installation of a red-dot sight for easy aiming.

An SH-2G(I) Seasprite deploys flares from the ALE-47 dispenser.

A Seasprite executes a confined landing in a forested clearing near Whenuapai, a training event designed to improve the aircrew’s handling coordination and communication.

RAF Brize Norton's mission is around the clock, 365 days per year requiring flight lines, taxiways and the runway to be fully serviceable even during heavy snowfall.

A creative image depicting a k-loader positioning at the cargo ramp to load bundles of cargo on board ZZ176.

The Royal Air Force’s C-17 Globemaster III fleet is an important component of the UK Joint Rapid Reaction Force. A No.99 Squadron C-17 cuts an imposing shape as it departs from Brize Norton on another mission.
The C-17 Globemaster III has a wingspan to the tips of the winglets of 169ft 9in, a height to the tip of the tail of 55ft lin, a fuselage diameter of 22ft 6in, an overall length of 174ft, with a maximum take-off weight of 585,000b; short work for the four Pratt & Whitney F117-PW-100 turbofan engines, each rated at 40,400lb of thrust.

Loadmasters chain down a heavy truck using the eyelets embedded within the aircraft's cargo hold floor.

This shot depicts how tightly packed the C-17 cargo hold can be, in this case with five Foxhound armoured patrol vehicles.

Loadmasters check bundles of ammunition and weapons are secured to the cargo hold floor.

Tu-95MS side number 23 at Engels Air Base, Russia.

Live Kh-101 missiles loaded on pylons at Engels Air Base before a long-range strike mission to Syria.

Easy in the turn.

Despite its 50-year plus age, the T-38 remains a good aircraft for pilot training.

Phase 3 of the course includes instrument flying during which the student occupies the aft cockpit with the canopy masked to prevent any visual regard.

Mission complete; the formation lead pilot breaks left to head for Sheppard Air Force Base which is located near to the city of San Antonio.

Two Fighting Bulls out on the northern Texas range near Sheppard Air Force Base, home of the 80th Flying Training Wing, the host unit of the Euro-NATO Joint Jet Pilot Training Program; the only internationally manned and managed undergraduate pilot training programme in the world.

Final briefing of an American student pilot with his Italian instructor before their T-6A mission starts.

The shape and form of the Pilatus PC-7 are recognizable in the Beechcraft T-6A Texan II, which was derived from the PC-7's bigger brother the PC-9.

Two T-6A Texans IIs assigned to the 89th Flying Training Squadron head toward the runway at Sheppard Air Force Base.

In all phases of the course, the simulator forms an indispensable element in which instructors teach students, but also students help each other.