A superb photograph by JIM LARSEN of one of Seattle Helicopter Airways’ Cessna CH-1C Skyhooks landing on a rooftop in the shadow of the city’s brand new landmark, the Space Needle, during the 1962 Seattle World’s Fair.

One of the Seattle Helicopter Airways (SHA) Skyhooks works the crowds at the Seattle World’s Fair, also known as the Century 21 Expo, during April to October 1962. The fair represented an excellent promotional opportunity for Cessna to extol the virtues of vertical flight in urban landscapes, and SHA’s fleet of CH-1Cs did a roaring trade during the six-month show.

A Seattle Helicopter Airways Cessna Skyhook alights on a rooftop at the World’s Fair in 1962.

Production CH-1C Skyhook N5746 “four up” over Wichita in a slight variation of the production colour scheme. Note the the large horizontal stabiliser, which is of constant chord, in contrast to that of the YH-41, which had a swept leading edge.

Every home should have one - the second prototype CH-1, N5156, in yet another colour scheme, demonstrates the helicopter’s ability to transport passengers direct to the doorstep of a residence or country club. Despite Seibel and Cessna’s best efforts the Skyhook was a doomed concept and has virtually no profile in the company’s official history.

The second prototype CH-1, N5156, demonstrates the type’s versatility in a Cessna publicity shot. This aircraft was bare metal with emerald green upper surfaces and a tapering black cheatline which ran from the nose to the aft fuselage.

Another promotional shot of the second prototype CH-1, N5156. The first prototype, N5155, was originally built without the horizontal stabiliser on the aft fuselage and was much tested before one was fitted. All subsequent CH-1s were fitted with the stabiliser, which was modified a number of times during the type’s development.
The Cessna CH-1 helicopter has a gross all-up weight of 3.000 lb. At this weight, with a 260-h.p. Continental engine, it has a cruising speed of 100 m.p.h. over a range of 270 miles. Time to 10,000 ft. is 9 min. 27 sec.; hovering ceiling at 3,000 lb. is 11,000 ft.; rotor diameter is 35 ft.; fuselage length 32 ft. 1 in.

The hardworking N5156 in US Army uniform; it never joined the Service but was painted for promotional purposes at the time of the Army’s order for ten YH-41s in the spring of 1956. Note the larger horizontal stabiliser placed further aft on the fuselage, as adopted on the CH-1B.

Fitted with the more powerful Continental O-526 engine, the YH-41 Seneca entered service with the US Army in September 1957, 56-4237 being the first to be delivered after a series of acceptance flights made by Lt A. E. Lush.

An extremely rare photograph of Capt James Bowman landing the heavily modified N5157 on its trolley (the undercarriage having been removed) following its record-setting high-altitude flight on December 27, 1957.

On September 13, 1955, Jack Zimmerman flew N5156 to Pike’s Peak in Colorado, where he flew the US Army’s Maj Gen John G. van Houten and Capt Knowles from nearby Fort Carson on a series of flights, one reaching 17,600ft.

A previously unpublished photograph of one of the UH-41As sent to Iran as part of the USA’s Military Assistance Program. It is believed that five examples served in Iran, although this is unconfirmed.

The CH-1’s instrument panel. CH-1Bs were fitted with an unusual airspeed indicator, the redline maximum speed being adjustable in flight, based on gross weight and altitude. This was replaced by a standard indicator on the CH-1C, as seen in the top left of the panel in the picture above.

A pair of promotional Cessna photographs from 1955-56 emphasising the spacious cabin of the CH-1; the cockpit view on the left is probably a CH-1B. Note the hard-to-ignore drive shaft fairing between the front seats. 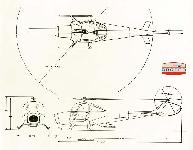 A simple promotional three-view drawing of the YH-41. In 1958 American model kit manufacturer Adams Action Models released a 1/40 th-scale model of the YH-41 “Missile Transporter”, which came with a pair of MIM-23 Hawk surface-to-air missiles to mount on the rear fuselage. This would of course have been disastrous in real life!