A possible candidate for the lower component of a piggyback bomber may have been the Armstrong Whitworth Whitley, which, despite its somewhat lumbering appearance, had sufficent performance to be able to undertake the carrier role. This Whitley V, N1532, operated with Nos 77 and 78 Sqns until it ditched in April 1940.

Specification P.27/32, to which Folland was broadly working for his piggyback bomber, ultimately resulted in a production contract for the similar but slightly larger Fairey Battle, which entered RAF service in May 1937. 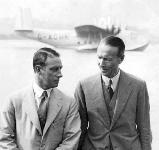 Major Robert H. Mayo (right) alongside Short Bros test pilot John Lankester Parker, who, along with fellow test pilot Harold Piper, made the first successful in-flight separation of the sole Short Mayo Composite (the bottom half of which, G-ADHK, Maia, may be seen in the background) on February 6, 1938.

One of a number of illustrations accompanying Robert Mayo’s British patent for a composite aircraft, dated April 27, 1933. A patent was granted in the USA in July 1935, the document stating that it was for “a means for launching aircraft, the particular purpose... being to enable an aircraft to be launched at such speed and at such altitude as to ensure the safe continuation of its flight, without its first having to attain the necessary minimum flying speed by taxying over land or water”.

The Boulton & Paul Sidestrand was the first RAF aircraft to be designated as a medium bomber, entering service with No 101 Sqn (the only unit to operate the type) in March 1929 and remaining on strength until 1936. Folland and Mayo’s bomber design was intended as a replacement for the ageing, but surprisingly agile, biplane bomber.

The first of Gloster’s monoplane fighters to fly and the last of Folland’s designs for the company, the F.5/34 made its first flight in December 1937. Only two prototypes were built; K5604, as seen here, and K8089, which first flew in March 1938, by which time Sydney Camm’s superior Hurricane was already in squadron service.
The Gloster F.5/34 was akin to a monoplane version of the Gladiator and was powered by an 840 h.p. geared and supercharged Mercury IX enclosed in a long-chord cowling with controllable cooling gills. The aircraft was a rival to the Spitfire and Hurricane and - unsurprisingly - was never put into production.

What Henry did next - the first aircraft to be built by the newly-established Folland Aircraft Ltd was the Fo.108 (known affectionately as the “Frightful”), designed to Specification 43/37 for an engine-test airframe. In total, 12 were built; this example, P1778, is seen at Hatfield in 1946, fitted with a close-cowled Napier Sabre.

“What Folland did years ago, people are doing today” - this 1939 advertisement for Folland Aircraft Ltd, formed after Folland left Gloster in 1937, capitalises on the perception of Folland as the designer of highly advanced aircraft by using his Gloster VI floatplane, built for the 1929 Schneider Trophy.

The author’s three-dimensional rendering based on Folland’s drawings for a high-speed long-range bomber to be used as part of a “piggyback" bomber concept devised by Folland and Robert Mayo. It appears that the drawings were made speculatively on Folland’s own initiative, as only his name appears on the documents. 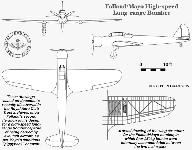 These drawings, based on documents recently discovered in the Royal Aero Club Trust archives, show Folland’s second iteration of his design for a high-speed long-range bomber capable of being carried by a launch aircraft, as per Mayo’s ambitious “piggyback” concept.