Only two Ambrosini Supersettes were built, one of which is seen here shortly after its completion at the company’s factory in Umbria. Although externally very similar to its S.7 forerunner, the Supersette had wings of greater span and was fitted with a more powerful de Havilland Gipsy Queen 70 engine and three-bladed prop.

Guidantonio Ferrari reveals the extremely accessible Alfa Romeo 115 air­cooled six-cylinder inline engine fitted in the S.7. Cooling airflow was controlled by gills and the exhausts were located on the underside of the cowling and offset slightly to starboard. Smith found the Alfa easy to start, remarking that ‘‘it’s a case of prime, switch-on and press. 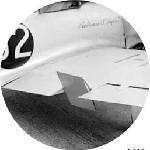 The dive brakes fitted within the trailing edges of the wings, which rotated to present two flat surfaces to the airflow, were "effective and similar to those fitted to the de Havilland Vampire".

Flight Editor Maurice Smith positions S.7 l-EFFE, wearing race number 92, in front of a backdrop of picturesque clouds while up from Redhill in August 1951. Smith remarked: “To a sports-car enthusiast, the knowledge that the S.7 has an Alfa Romeo engine under its tight cowlings added zest to the occasion”.

In 1952 Ambrosini fielded an example each of the S.7 and Supersede to bid for the various trophies up for grabs in that year’s British air-racing season. Here Guidantonio Ferrari waits for the starter’s flag to drop before getting S.7 l-BOZI away as the last aircraft in the Daily Express race at Shoreham on August 2. Ferrari romped home in second place at an average speed of 230 m.p.h. (370km/h).

Ferrari in the cockpit of l-EFFE in the summer of 1951. The Italian had been made an honorary member of “The Throttle-Benders’ Union”, the unofficial brotherhood of regular participants in British air races, the badge of which is seen here below the cockpit. When Ferrari won the 1,000-mile Grand Prix air race at Bari later that year he cabled fellow member Nat Somers: “Happy to advise you of my victory in the aerial 1,000 miles with the Ambrosini carrying the insignia of the Throttle-Benders!".

Count Leonardo Bonzi’s S.7 l-BOZI attracts the attention of a pair of lads at the reconvened Daily Express air race at Shoreham in September 1951. Both S.7s participated in the race, with Ferrari flying l-EFFE with race number 92 and Bonzi flying l-BOZI with race number 98.

With the swing-over canopies for the cockpit and rear compartment open, S.7 l-EFFE is pushed out of the hangar at Redhill in preparation for Maurice Smith’s flight in August 1951. In the background is Miles Gemini G-AGUS, fitted with Continental engines. Smith stated that a Miles Aries was used for the air-to-air photography.

In 1952 l-BOZI wore race number 92 (the number l-EFFE had worn the previous year) for the Daily Express race. Here Ferrari gets the tail up quickly as he departs Shoreham to place second. 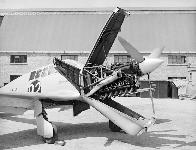 The distinctive ‘‘petal” cowling of the Supersede comprised four separate panels which opened up to expose the engine in its entirety, making it extremely easy to work on. Ingenious design methods prevented such a close-fitting cowling from causing overheating problems - the exhaust stubs projected into venturi-type ducts which caused an artificial draught over the engine when it was running. To achieve perfect symmetry for the cowling on both sides of the fuselage, the engine was tilted 6° sideways.

Dempster shows off the Supersette’s graceful planform during his flight from Leavesden in August 1952, peeling away from the Percival Proctor camera aircraft. ‘‘The old saying that if an aircraft looks good it will fly well”, he said, “quite definitely applies to the Supersede ... it has all the qualities I look for in an aeroplane - comfort, speed and manoeuvrability”.

Maurice Smith shows off the exquisitely clean lines of the S.7 during his August 1951 flight. Sergio Stefanutti designed the sleek trainer to be as aerodynamically efficient as possible, although it is curious that neither the S.7 nor the Supersede was equipped with a retractable tailwheel, which must have increased drag.

Smith gets a brief guided tour of the S.7’s cockpit at Redhill before his test flight. Note the generous flaps, seen here in fully extended position. 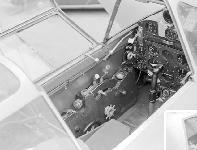 The front cockpit of the two-seat Supersede, which The Aeroplane’s Derek Dempster considered ‘‘neat and well thought out”, although he disliked the fact that the rudder pedals could not be adjusted for length while in flight, only on the ground. Ferrari suggested this would be subject to a later modification. 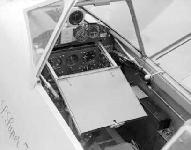 One feature Dempster was extremely impressed with, however, was the retractable map table, which could be extended for use and then folded back into a slim recess in the instrument panel with a minimum of fuss.

With the swing-over canopies for the cockpit and rear compartment open, S.7 l-EFFE is pushed out of the hangar at Redhill in preparation for Maurice Smith’s flight in August 1951. In the background is Miles Gemini G-AGUS, fitted with Continental engines. Smith stated that a Miles Aries was used for the air-to-air photography.