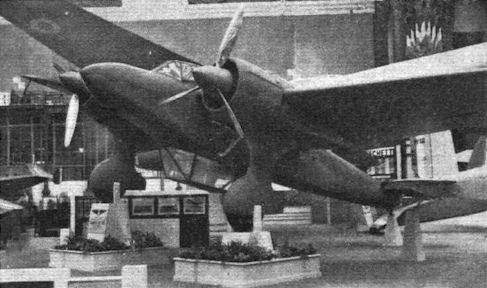 Interesting in that it typifies the new French classification of avion de travaille (i.e., general-purpose machines which can operate from advanced ДальшеMore>>> aerodromes for reconnaissance or bombing work or, alternatively, be used for the training of pilots on twin-engined types) is the N.C.510T.3. This is an Hanriot design and is planned as a high-mid-wing monoplane with two small-diameter Gnome-Rhones, a fixed undercarriage and a special transparent compartment under the fuselage to facilitate observation. The machine is comparatively slow (one of the penalties in “g.p.” designs), the top speed being less than 220 m.p.h. It may be recalled that the specialised Hanriot twin-engined fighter with the same engines is claimed to do well over 300 m.p.h.

The business end of the Hanriot N.C. 510 P.3 avion de travaille. View for observation is considered so important that there is a special compartment below the fuselage

A close-up of the observer’s compartment below the fuselage of the general-purpose twin-engined Hanriot, the French designation of which is avion de travaille.
<<   0/0   >>